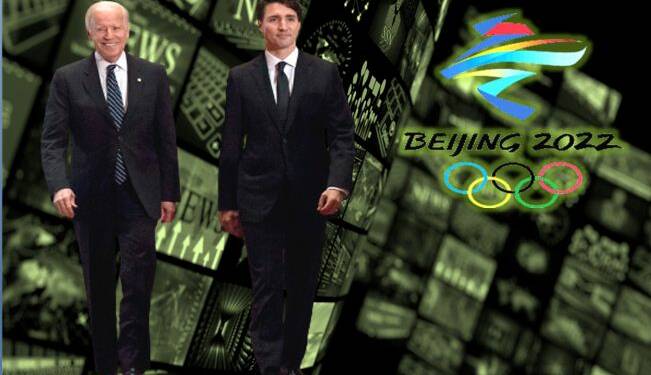 At a time when the world is boycotting the 2022 Beijing Winter Olympics, the Canadian and the US media seems busy engaged in promoting the games to an extent that will make China shy. Canadian Broadcasting Corporation (CBC), which is the state public broadcaster of Canada, is covering the Beijing Olympics like it is a game of their own. On the other hand, the Democrat’s stooge media NBC is promoting the genocide games in such a way that it seems they want to whitewash the image of China and its repressive CCP regime.

CBC, the Canadian public broadcaster’s website has been filled with stories and articles about the Beijing Olympics. At a time when Canada is facing such an unprecedented large scale protest from truckers and transporters the cover stories and most of the pages of CBC seems devoted to the Beijing Winter Olympics.

It’s just bizarre that a state-sponsored public broadcaster is all out ignoring the biggest issue Canada is facing that essentially holds relevance since it hankers over not just the economy but the livelihood of so many Canadians. The way CBC is covering the truckers freedom convoy with just two or three small and cornered articles is proof that the Trudeau administration doesn’t want the truckers protest to get the coverage that it deserves.

Also Read: The Beijing Olympics goes down in history as the worst PR disaster ever

The US democrats sponsored coverage of Genocide Olympics

While CBC is busy ignoring the truckers protest, NBC, the stooge media of US democrats is busy whitewashing the image of China and the CCP regime through its coverage of the Chinese genocide games. If one visit the website of NBC, the cover image of the Beijing Olympics welcomes you with an additional link to the live coverage of the games. On one hand, the US has diplomatically boycotted the Beijing Olympics and on the other, the Democrats sponsored media is promoting it with cover images and live coverage links.

Moreover, what remains surprising is that the topics that elicit concern like the poaching of US sports talent by the CCP, to date have gone unnoticed by NBC. CCP’s catching of US talent’s raises questions over the sovereignty and national security of the US. It also raises doubts about the safety and security of US sports personalities and citizens.

Many US sports persons like Eileen Gu, Jake Chelios, Jeremy Smith, Zhu Yi are already under the alms of China. That’s the influencing power of the CCP in the US. Also, many of the poached US athletes continue to be US citizens while representing China in the 2022 winter Olympics.

In a recent report, Jake Chelios confirmed that he and several of his Team China teammates still have their American passports. When asked whether he had been naturalized as a Chinese citizen, Chelios said, “I don’t think we’re supposed to comment on that”.

The Biden and Trudeau administration sponsored coverage and promotion of the 2022 Beijing Genocide Olympics stand contradictory to their previous held claims of raising a voice against genocide and human rights abuses in China. It’s evident that to suppress and bury the real issue in their respective countries, Biden and Trudeau are riding on a new ploy to whitewash the genocide games into such a celebrated event.