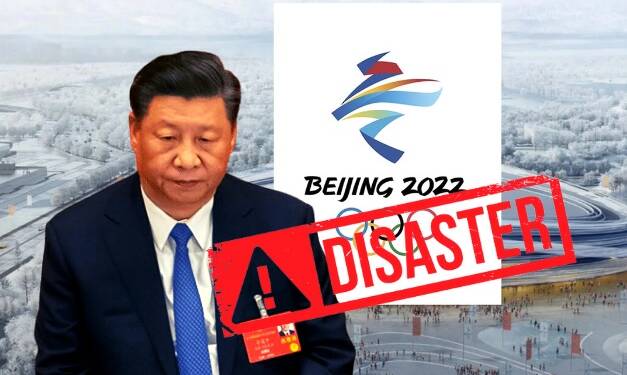 If the ongoing Beijing Winter Olympics was a PR exercise for China, it is bound to go down as the worst PR exercise by a country in recent times. And we have our reasons to claim this.

From manhandling a Dutch television reporter just outside the Winter Olympic opening ceremony to further agonizing its rivals like India and South Korea, China has done everything that it could have done to show its ugly face to the world at the Beijing Winter Olympics.

China’s grand show at Beijing Winter Olympics was supposed to reinvigorate business ties with countries like South Korea that are looking to decouple from China for the past two years.

But all that Beijing has managed to do is to annoy the Koreans. A conservative South Korean civic group even tore up the Chinese flag during a rally near the Chinese Embassy in Seoul on Friday. They were protesting against controversial refereeing against some South Korean short track speed skaters at the ongoing Winter Olympics.

The protesters demanded that China apologise for ‘biased’ refereeing at the Winter Olympics. And the protesters were also angry about the silence of their government against Beijing’s unfair actions.

In the men’s 1000m semifinals on Monday, South Korea’s Hwang Dae-heon and Lee June-seo got disqualified from their respective heats for an illegal pass and lane change respectively. After these decisions, Chinese skaters were able to reach the final and grab the gold and silver medals.

As if this wasn’t enough, South Korea also got angry about cultural appropriation by China. A performer at the opening ceremony wore a traditional Korean dress called ‘hanbok’. China was clearly trying to pass off the Korean attire as its own, which has stoked anti-Chinese sentiment in South Korea. Both social media and mainstream media in the country have criticised China’s brash behaviour.

Even the centre-left Hankyoreh newspaper condemned China’s actions and stated, “We need to continue developing neighbourly relations with China, but we also need to be willing to stand up against attempts to distort history.”

Cultural appropriation by China is a longstanding issue in South Korea. China has been passing off South Korean culture as its own since the 2000s. It has passed off South Korea’s kimchi dish as “Chinese food”.

Even last year, the South Koreans vented online about the Chinese search engine Baidu’s act of listing a number of Korean foods such as kimchi and samgyetang, as cuisines of Chinese origin.

And China’s present actions are only making it worse.

South Korea is not the only country on Beijing’s agenda. It also wanted to repair its bruised image in India and affirm a sentiment of friendship with Moscow.

But just before the Beijing Winter Olympics, China made a huge mistake. It decided to play mind games with India by making a soldier, Qi Fabao, involved in the Galwan valley clash with the Indian Army last year as its pick for the torchbearer at the upcoming Games.

The next thing we know, India announced a full diplomatic boycott of the Winter Olympics. It had every reason to do so. The entire episode also ended up embittering Sino-Russian ties. Russian President Vladimir Putin has been trying to play mediator between India and China. And China’s actions came out looking like an effort to undermine Putin’s desired mediator role.

And therefore Putin too decided to humiliate China during the Beijing Winter Olympics. Here is what Putin did to Xi Jinping and the CCP during his visit to China:

The Winter Olympics opening ceremony saw very low viewership across the world. But there was a major highlight during the event- Chinese propaganda about its ‘humane’ treatment of Uyghurs.

Yes, after killing, raping and torturing millions of Uyghur Muslims in the Xinjiang province, Beijing actually had the temerity to field country skier Dinigeer Yilamujiang as one of the cauldron lighters. The Chinese State media proudly claimed that Yilamujiang has Uyghur heritage.

But where is Yilamujiang now? Well, having used the Uyghur woman for sheer propaganda, China has now side-tracked her. After her Olympics debut on Saturday, Yilamujiang avoided the media and slipped away through a ‘mixed zone’ along with other Chinese athletes. She has disappeared and Chinese authorities have declined to comment on her sudden disappearance from the media limelight.

China’s Uyghur propaganda has therefore fallen flat on its face.

And if there was any doubt about China’s cruel character, it was telecast live on Friday when China hosted the Winter Olympics opening ceremony at the Bird’s Nest in Beijing. A Dutch television reporter was literally manhandled and stopped from presenting live on air just outside the venue.

The journalist Sjoerd den Daas could be heard saying, “We are now being pulled out of here.” He added, “We have just been expelled from another area, so I’m afraid we’ll have to come back to you later.”

So, the harsh atmosphere for foreign and private media in China was caught live. This may well have been a brash attempt by the Chinese authorities to censor a foreign journalist and that too without any reason.

For China, the Winter Olympics were a means of controlling the damage done to its image over the years. But China has only ended up affirming its cruel, selfish and intolerant image. This is quite clearly a terrible PR exercise on the Communist country’s part.