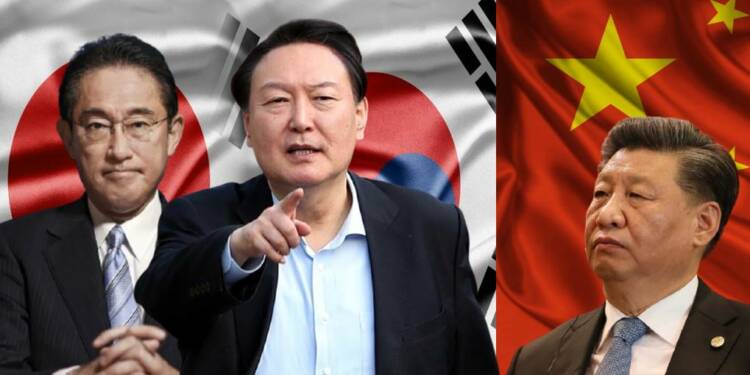 South Korea is fast slipping out of the ruling Democratic Party’s hands. The conservatives are growing in strength and numbers, primarily due to the support of South Korean youth for them. A clear divide has emerged between South Korea’s younger and older generations. The youth is very clear in its agenda – they want nothing to do with China, and want their country to set aside and preferably resolve all differences with Japan in order to take on Beijing collectively. The older generation is much more hungover in their fascination of China, and they view Japan as a foe, owing to imperial Japan’s colonisation of the Korean peninsula for some time in the 20th century.

Also read: Japan’s elections indicate rosy days ahead for China-hawks in South Korea and the Philippines

The youth is winning in South Korea. South Koreans have every reason to hate China. The paper dragon’s ‘cultural imperialism‘ is too manifested to ignore. The South Koreans even vented online about Chinese search engine Baidu’s act of listing a number of Korean foods such as kimchi and samgyetang, as cuisines of Chinese origin. Also, China has been trying to steal traditional Korean clothing hanbok, by misrepresenting it as a type of Chinese hanfu. China is trying to portray South Korean culture to be similar to that of the Chinese. This is being done by Beijing with the goal to perhaps, in the future, stake claim over the Korean peninsula as a whole.

Data released by the Pew Research Centre in October 2020 showed that anti-China sentiment is on the rise in South Korea, especially amongst youngsters. Overall, 82% of South Koreans aged 30-49 years viewed China negatively, while the number stood at 80% for those aged 18-29 years. Therefore, it is but natural for South Korean polity to turn anti-China in nature as well. Politicians who want good ties with China and want to serve the CCP’s objectives will simply not be supported by the public in a democracy like South Korea.

Also read: South Korea’s opposition leader is just 36 and a major China hawk. And he is winning

During an interview in Seoul, Lee Jun-seok emphasized the need to explain to the South Korean public early during conservative candidate Yoon Seok-youl’s presidency, that sensitive historical issues involving Japan should be handled through diplomacy.

He added, “I hope to visit Japan sooner or later to see and feel the atmosphere there so that I could give advice to Yoon (on handling South Korea-Japan issues).” Lee predicted that once Yoon comes up with a good case to make to the public, the 60-year-old would engage in negotiations with Japan more actively than the current administration of President Moon Jae-in.

Under Moon, in recent months, South Korea has renewed its proximity towards the People’s Republic of China. To be very blunt about it, South Korean President Moon Jae-in is sitting firmly in Xi Jinping’s lap with a slew of pro-Beijing decisions and optics over the past few months. It was already a factor in making the Moon government highly unpopular.

Also read: Chinese poodle Moon Jae-in is suddenly a Japan fan because the reality is a female mongrel

Under Moon, Seoul has taken a slew of decisions that have exacerbated the historical conflict between Japan and South Korea. Korean courts, for example, ordered Japan to compensate victims who were coerced into working for Japanese companies and wartime brothels. Japan, however, claims that the issue of compensation was settled by a 1965 treaty that normalized relations between Seoul and Tokyo.

Additionally, decisions like pushing a tourist-focused ‘Chinatown’ in South Korea’s eastern Gangwon province haven’t gone down well with the people of South Korea, who hold a grudge against China’s ‘cultural imperialism’. Moon Jae-in’s push for naturalisation of Chinese people as South Korean citizens has also alienated the man and his Democratic Party, from the South Korean public.

Essentially, at the core of South Korea’s public embracement of Japan, is China. The communist nation has really made quite a name for itself in South Korea, as people there are beginning to despise it to an extent that they are pushing for closer ties, cooperation and possibly, even a military alliance with a historical foe in the form of Japan.