South Korea’s opposition leader is just 36 and a major China hawk. And he is winning 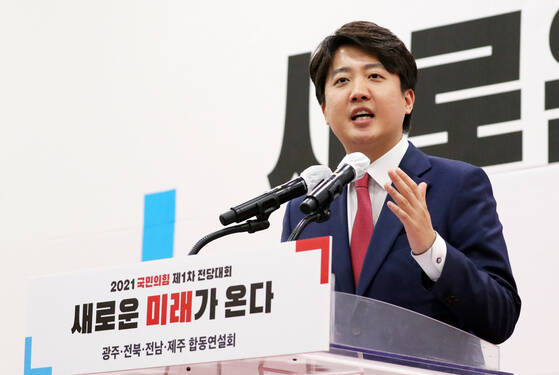 South Korea’s main opposition leader is a young, charismatic and democracy-loving man. The best part, however, is that 36-year-old Lee Jun-seok is a conservative who is propelling the rise of his party to a position where it would be able to easily challenge the liberal government of the country in next year’s presidential polls. President Moon Jae-in is set to retire next year, and the conservatives are determined to win power in South Korea. These are crucial times. The world as a whole is preparing itself to fight China, and the People Power Party of South Korea wants to be a part of that fight.

Harvard-educated Lee Jun-seok has been making headlines for quite some time now. He is about to centre South Korean politics around him, even though he may not run for President anytime soon – which is a good thing. As it turns out, the young conservative leader is also a declared China hawk, and the man did not mince his words when he called out China for its anti-democratic and totalitarian mindset. Lee, a former member of the PPP’s Supreme Council, was chosen chairman of the party last month after receiving 43.82 per cent of the vote.

Speaking to Bloomberg, the 36-year-old leader of South Korea’s biggest opposition party said his fellow millennials will push back against Chinese “cruelty” in places like Hong Kong, indicating a tougher line with Beijing if his political group regains power. Lee aims to revisit South Korea’s rather pacifistic and redundant foreign policy, and bring it in sync with the generational change that he says is being witnessed in South Korea.

In a pro-democracy line that should worry China big time, Lee Jun-seok said, “We’re definitely going to have to fight against the enemies of democracy.” Interestingly, Lee took part in Hong Kong’s pro-democracy protests in 2019, and is therefore, personally apprised with what fighting the CCP looks like. The young leader said the pro-democracy movement in the Asian financial hub was reminiscent of South Korea’s campaign in the 1980s that toppled its autocratic government.

Speaking about the doublespeak of President Moon Jae-in and his party, who say they are committed to human rights but continue to placate China, Lee said, “I can definitely say the Moon administration is leaning towards China.” He added that the Korean public is “not happy about it.”

In fact, this reflects in the ratings of Moon Jae-in as well, which have constantly been in the 30 per cent mark – a red zone area for any leader for over 18 weeks. Only recently, his ratings breached the 40 per cent mark. However, Moon Jae-in’s party still has a lot to worry about. The ruling Democratic Party (DP) currently has an approval rating of 32.9 per cent. It was below the 30 per cent mark until recently. The conservative People Power Party, led by Lee Jun-seok currently has an approval rating of 37.1 per cent.

Increasing support for the PPP today contrasts sharply with one year ago, when the PPP secured only 102 seats in the National Assembly, while the Democratic Party (DP) won 174 seats. The opposition PPP’s rapidly growing support from young people highlights the public’s increasing dissatisfaction with the current Moon administration. According to the East Asia Forum, President Moon has lost a majority of supporters from his key voting bloc. Young South Koreans who traditionally vote left have turned into swing voters. His approval rating is lowest among young South Korean men, who are increasingly expressing conservative political views.

The PPP recently won by-elections in Seoul and Busan, in a glowing testimony to the conservative party’s rising support in South Korea. Following the by-elections, many political observers remarked that dissatisfaction with the ruling DPK has grown among young people in their 20s and 30s.

Although Lee Jun-seok will not be running for President anytime soon, as chairman of the PPP, he will definitely decide who challenges the ruling Democratic Party. And the ruling party cosying up to China only adds to reasons why South Koreans are getting ready to kick it out of power. South Koreans actually hate China. People in South Korea are afraid of China’s “cultural imperialism”, by virtue of which Beijing tends to appropriate Korean cuisines, national heroes, and even Korean clothing.

Another anti-China and pro-Japan leader Yoon Seok-youl, South Korea’s former chief prosecutor, declared his candidacy for president in next year’s election, pledging to seek a “grand bargain” to resolve the country’s many contentious historical issues with Japan.

Read more: Anti-China, Pro-Japan and a Moon Jae-in hater – Meet the man who could be the next President of South Korea

In fact, data released by the Pew Research Centre in October 2020 showed anti-China sentiment is on the rise in South Korea, especially amongst youngsters. Overall, 82 per cent of South Koreans aged 30-49 years viewed China negatively, while the number stood at 80 per cent for those aged 18-29 years.

South Koreans have every reason to hate China. The paper dragon’s “cultural imperialism” is too manifest to ignore. South Koreans even vented online about Chinese search engine Baidu’s act of listing a number of Korean foods such as kimchi and samgyetang, as cuisines of Chinese origin. Also, China has been trying to steal traditional Korean clothing hanbok by misrepresenting it as a type of Chinese hanfu. China is trying to portray South Korean culture to be similar to that of the Chinese. This is being done by Beijing with the goal to perhaps, in the future, stake claim over the Korean peninsula as a whole.

Conservatives are thus using the ‘China threat’ to make deep electoral inroads and they are doing it quite successfully. And with a young Lee Jun-seok leading the People Power Party to capitalise on the youth’s anti-China and anti-liberal sentiment, the conservatives can really eye the presidentship of South Korea next year.