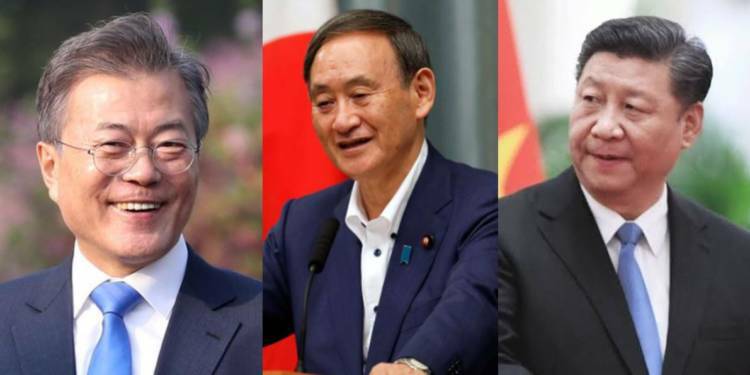 South Korea’s President Moon Jae-in is having some serious mood swings. At one moment, he wants to befriend China and irk Japan. But at the very next moment, Moon wants to mend relations with Tokyo and isolate Beijing. At the end of the day, Moon knows that his pro-China image is hurting his Democratic Party’s 2022 election prospects.

Earlier this month, Moon said that his government remained open to dialogue with Tokyo. He reportedly wants to boost cooperation with Japan, while resolving historical conflict between the two countries dating back to Japan’s colonial rule in South Korea from 1910 to 1945.

South Korea’s President said, “Our government has always kept the door open for dialogue to jointly respond not only to our two countries’ pending issues but also threats facing the world, including COVID-19 and the climate crisis.”

He added, “For historical issues that need to be rectified, we will resolve them through actions and practices that are consistent with universal values and the standards of the international community.”

You might wonder why Moon is being accommodative despite lewd remarks by a senior Japanese diplomat. Well, there are two main reasons.

Firstly, Japan’s message may have been a little vulgar, but it was spot on. Under Moon, Seoul has taken a slew of decisions that have exacerbated the historical conflict between Japan and South Korea. Korean courts, for example, ordered Japan to compensate victims who were coerced into working for Japanese companies and wartime brothels. Japan however claims that the issue of compensation was settled by a 1965 treaty that normalized relations between Seoul and Tokyo.

Secondly, Moon has an image crisis to tackle. The South Korean President has been sitting in China’s lap with a slew of pro-Beijing decisions and optics over the past few months. In South Korea, Moon and his centre-left Democratic party are facing accusations of kowtowing to Beijing and failing to take a tough stance against China’s poor response to the COVID-19 pandemic.

In such circumstances, Moon Jae-in’s China ‘pivot’ is not at all resonating with the popular opinion of China in South Korea. On the other hand, the Conservatives are happily cashing in on Moon Jae-in’s blunder.

Moon’s pro-China and anti-Japan image militates strongly against the growing anti-Chinese sentiment. According to a recent survey by ​the polling company ​Hankook Research​ and the Korean newsmagazine SisaIN, China has replaced Japan as the country regarded most unfavourably in South Korea. Over 58 per cent of the 1,000 respondents called China “close to evil” while only 4.5 per cent said that it was “close to good.”

Meanwhile, Moon’s opponents are cashing in on his pro-China image. South Korea’s main opposition leader is a 36-year old conservative, Lee Jun-Seok. He is a major China hawk and doesn’t shy away from calling out China for its anti-democratic and totalitarian mindset. In fact, Moon’s conservative opponents have also started supporting a broad policy to improve their relationship with Tokyo and isolate Beijing.

Meanwhile, Moon’s pro-China image is simply giving too much fodder to his opponents. They are capitalizing on his dipping popularity in order to push back against the centre-left Democratic party.

Therefore, it makes sense for Moon to suddenly advocate better ties with Japan while shedding his pro-China image. However, it may be too little, too late for Moon Jae-in and his Democratic party.

The fact remains that the Yoshihide Suga government in Japan simply doesn’t want to deal with Moon. It is, in fact, waiting for a change of guard in South Korea. Tokyo understands that it can actually negotiate for better ties more convincingly with a Conservative government in South Korea, likely to come to power next year.

Moon may be having mood swings regarding Japan, but Suga is very clear about his South Korea policy- he will deal only with a Conservative President who actually wants to maintain a safe distance from the People’s Republic of China.