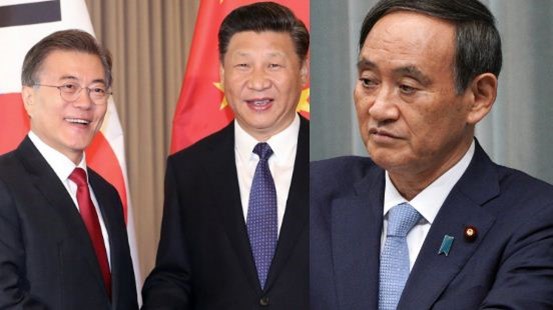 The geopolitics in East Asia is extremely turbulent. Moon Jae in’s Presidency of South Korea has made Seoul move closer to China and away from the US alliance system. Japan has made things clear from their side in the face of constant confusion from the Moon camp.

According to Seoul’s foreign ministry, South Korea summoned Japan’s ambassador on Saturday for “undiplomatic” remarks concerning President Moon Jae-in and the possibility of a summit during the 2020 Tokyo Olympics. In the same interview with South Korean cable network JTBC, the unnamed diplomat stated that Moon is in a “tug of war alone with himself” because Japan currently has “no space to pay attention to Seoul-Tokyo relations.”

The message was clear, that the Japanese government is not interested in dealing with the Progressives, and is more optimistic for a change in guards, with the entry of conservatives who are more supportive of closer relations with Japan.

Even though the United States under Joe Biden has made a very half-hearted effort to bridge the differences so that the allies can efficiently work together, Moon Jae-in seems unwilling to let the frictions with Japan subside. South Korea’s Naval forces and Coast Guards began a military drill on Tuesday near the disputed easternmost islets of Dokdo, a set of islands also claimed by Japan, military sources told Yonhap news agency.

Under Moon, in recent months, South Korea had renewed its proximity towards the People’s Republic of China. To be very blunt about it, South Korean President Moon Jae-in is sitting firmly in Xi Jinping’s lap with a slew of pro-Beijing decisions and optics over the past few months. It was already a factor in making the Moon government highly unpopular. In addition to that, the current developments are sure to cost his centre-left Democratic Party heavily in the 2022 elections.

The recent remarks come as the two countries are said to be in negotiations about organising a high-level match during the Games to mend ties that had deteriorated to their lowest point in years due to historical differences.

Following JTBC’s story, the Japanese ambassador claimed that his deputy, Hirohisa Soma, was the one who said the “very improper” statements, however, he did not specify what was said. In such a situation, the only thing that can make sense is the fact that the Japanese government has realised that there is no utility in dealing with a government that has lost the support of the people and is soon going to be replaced.

Tokyo and Seoul are both important US allies, democracies, and market economies, but their ties are strained by continuous disagreements over restitution for Japan’s colonial authority over the Korean peninsula in the early twentieth century. Japan’s leader allegedly recognised “extremely challenging” relations due to wartime concerns at a press conference earlier this month, but said it was up to South Korea to deal with these issues.

South Korea is getting ready for the elections next year, and as the prospect of the current President Moon Jae-in has taken an insurmountable dip, many interesting people are announcing their candidature in the conservative bloc.

Yoon Seok-Youl, South Korea’s former chief prosecutor, declared his candidacy for president in next year’s election, pledging to seek a “grand bargain” to resolve the country’s many contentious historical issues with Japan. His being part of the conservative bloc naturally makes him an anti-China personality, and because of this, his election would be highly supported by the allies world over.

The possibility of better relations with the entry of Conservatives as South Korean government, has made Japan realise that there is no need to deal with Moon Jae-in, who is deep in bed with China. With the latest statement, Japanese diplomats have said things that needed to be said, to remove all the confusion, Moon Jae-in was trying to create.