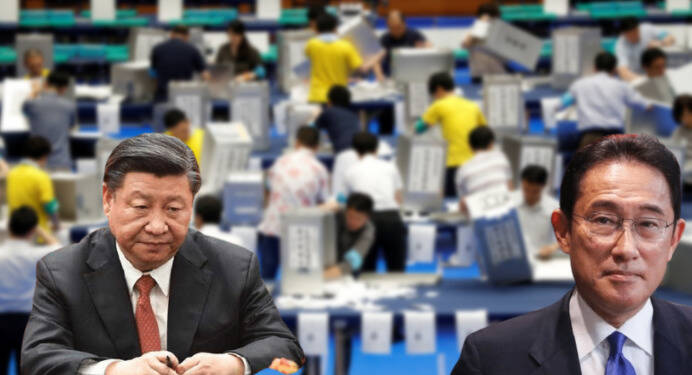 Japan’s election results are out and despite all the talk about an anti-incumbency sentiment due to the COVID-19 Pandemic, the ruling centre-right Liberal Democratic Party (LDP) has secured a full majority. This is a vindication of how China hawks will be rewarded by anti-China voters in East Asia and other parts of the Indo-Pacific.

Japanese Prime Minister Fumio Kishida took over from Yoshihide Suga, who stepped down in September amidst plummeting poll ratings for the Liberal Democratic Party (LDP) due to alleged mishandling of the Pandemic and a decision to go ahead with the 2020 Olympics in Tokyo, despite the Pandemic scare. The 64-year old leader faced a tough test of keeping the LDP in power shortly after coming to reign.

The Liberal Democratic Party (LDP) has managed a comfortable victory under Kishida, winning 261 seats, which is far ahead of the parliamentary majority of 233 seats. This effectively means that the Liberal Democratic Party (LDP) has retained its decades of control over Japanese politics. Japan is now confident about Kishida emerging as a tall leader, and even the Japanese stock markets rallied with his victory. Nikkei 225 benchmark share index in Tokyo jumped by over 2 per cent in Monday morning trade.

If the Liberal Democratic Party (LDP) was facing criticism over its alleged mishandling of the COVID-19 Pandemic, then why has it been re-elected with a landslide majority? Well, you should look for an answer in Kishida’s radically anti-China policies after coming to power.

Kishida has been acting as a major China hawk. He supports a parliamentary resolution denouncing China’s persecution of the Uyghur minority and wants to appoint a prime ministerial aide to monitor the situation. Kishida believes that Japan, in collaboration with the US and other like-minded countries, should stand hard against authoritarian regimes, particularly against China’s growing aggression.

Kishida also intends to strengthen the Japanese coast guard’s capabilities, as Japan and China continue to remain at odds over the sovereignty of a collection of small East China Sea islets.

Also, the Japanese PM is looking to crack down heavily on technology theft in China, cooperate with the Quad allies to marginalise China, warm up to Russia to drive a wedge between Moscow and Beijing, and take on the Chinese student spies. Kishida’s party has won only because he is a China hawk.

Message for South Korea and the Philippines:

The poll results in Japan are the barometer for predicting the way things are going to shape up in South Korea and the Philippines, as both the countries are set to go to the polls next year.

Both South Korea and the Philippines are passing through similar political circumstances. South Korean President Moon Jae-in and Philippines President Rodrigo Duterte go soft on China. While Moon goes soft on China, Duterte tends to swing constantly between the US and China. Neither of the two leaders responded to Chinese belligerence as a nationalist leader should.

Also, neither Moon nor Duterte can contest the elections in their respective countries next year, as both the countries impose term limits on their Presidents. Yet, there are China hawks in both the countries who threaten to derail Duterte’s PDP–Laban in the Philipines and Moon’s Democratic Party of Korea.

Harvard-educated Lee Jun-Seok, a 36-year old China hawk, is leading the conservative People Power Party of South Korea. He is banking on greater appeal with the youth and anti-China policies to clinch a victory in the elections next year.

On the other hand, China is itself worried about a China hawk coming to power in the Philipines. Chen Xiangmiao, an assistant research fellow at the National Institute for South China Sea Studies, recently said that the Philippines need China’s economic support in tackling the problems of economic recovery, public health and security regardless of the upcoming leader’s views on China.

“If the new leader goes too far toward the US, there could be a huge loss of investment from China, something the Philippines cannot afford at the moment,” Chen said in an interview published on Sept. 8 by the Global Times, the official Tabloid of the Chinese Communist Party.

Duterte has been facing criticism for his dovish policies towards China. The China factor in the Philippines became evident recently when Manny “Pacman” Pacquiao, the ambitious boxer-turned-politician, was voted out of the party after he criticised President Rodrigo Duterte’s dovish China policy. Days after he was ousted from the ruling party, Pacquiao announced his presidential run, sending shivers down the spine of the communist rulers in China.

Both South Korea and the Philippines, therefore, have a China hawk contending for the top post next year. Japan’s electoral results meanwhile are a signal of positive results for such leaders who are making anti-China policies the pivot of their poll campaigns.