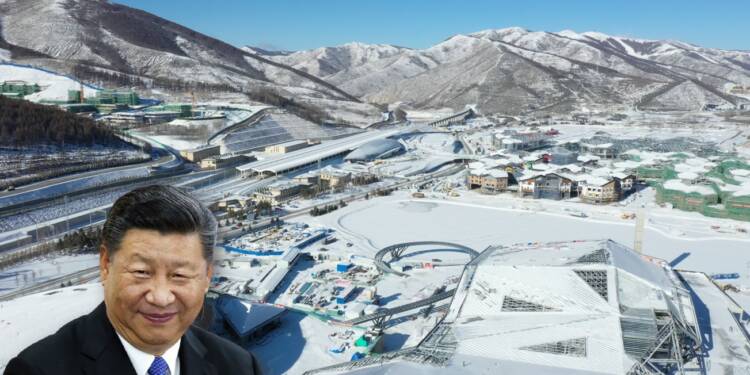 Should Beijing be hosting the Winter Olympics? Absolutely not. China is not capable of hosting the Olympics, especially in Beijing. The city and its neighbouring areas are not snow-clad naturally by any stretch of the imagination. In fact, Beijing suffers among the most severe water scarcities around the world. It is an arid region, but that has not stopped the Chinese Communist Party from hosting the Winter Olympics. What the CCP did not account for, however, was the environmental damage that the Games would have. You see, China has used nearly 2 million cubic meters of water — enough to fill 800 Olympic-sized swimming pools — to create enough fake snow to cover ski runs and access roads during the Games.

According to a Bloomberg report, a dozen machines furiously churned out snow to cover the mountains of Zhangjiakou near Beijing. The slopes were soon blanketed in white, and the canons didn’t stop there. The machines proceeded to coat the rest of the grey landscape to complete a perfect snowy backdrop that could be broadcast around the world. China has been using a combination of water, chemicals, and freezing temperatures to artificially produce snow and ice for the upcoming Games.

China’s Capital to turn into a Ghost Town

Now here’s what’s going to happen. All that artificially produced snow will eventually melt. Mind you – it has been produced using chemicals. The entire snowy landscape will disappear as summers set in. The snow will melt, and it will seep into the ground. This will lead to widespread soil and underground water contamination in and around Beijing.

Over half of Zhangjiakou is “highly water stressed,” according to China Water Risk, which is a Hong Kong-based environmental group, and the local water resource per capita is less than one-fifth of China’s national average.

Due to the soil and water contamination that the Winter Olympics are bound to cause, Beijing and its surrounding areas could very well turn into uninhabitable chunks of land in the near future. Beijing – the Chinese capital could itself turn into a ghost town considering how the city sources much of its aqua needs from Zhangjiakou.

Already, the people of Beijing are not really having a splash living in the Chinese capital. 700 million of China’s total population endures water scarcity almost every day. China’s per capita aqua availability is one-quarter of the global average.

Groundwater depletion has reached staggering levels, causing some parts of Beijing to fall into the earth by more than 14 centimetres per year. Experts identify three major reasons for this water crisis in China:

Adding to this, climate change is also taking a massive toll upon China’s water resources. Freshwater availability has taken a big hit in wake of China’s fast-melting glaciers. A study by Greenpeace in 2018 revealed that 82% of China’s glaciers have retreated and more than one-fifth of the ice cover has disappeared since the 1950s.

Read more: The actual number of Covid infections and deaths in China is out, and China beats every country by a milky way

But the situation could seriously exacerbate by the end of 2030 when Chinese glaciers are expected to reach their “peak water” level. ‘Peak Water level’ is a point from where the quantity of water released from storage within the melting glacier starts to decline. Consequently, glacial run-off into the Yangtze alone has been reduced by 13.9% since the 1990s.

China’s incessant want of trying to project itself as a global superpower is now going to ensure that ordinary Chinese citizens get deprived of water and are forced to relocate to regions where the water scarcity is not as bad as it is in Beijing.