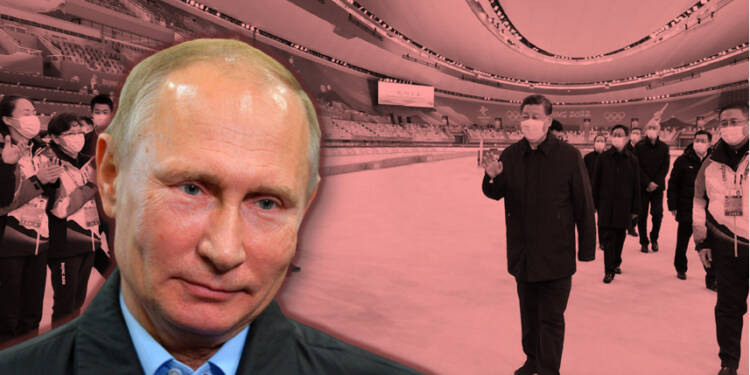 A visible Sino-Russian bonhomie was recently put on display by Vladimir Putin and Xi Jinping at the opening of the Beijing Winter Olympics. In a joint statement, Russia and China said they “oppose further enlargement of NATO” and called on the organization to “abandon its ideologized Cold War approaches”. This would suggest that Beijing and Moscow are best friends, right? Well, that is what mainstream media wants you to believe. The fact of the matter is that Vladimir Putin travelled to China recently only to humiliate China and its despotic president, Xi Jinping. There was no bonhomie, rather – things went awfully bad for China.

Observers within China now believe that Beijing suffered a series of setbacks in its dealings with Russia during President Putin’s recent visit to Beijing.

Here is how Vladimir Putin humiliated Xi Jinping and the CCP during his visit to China:

Another important aspect of Vladimir Putin’s visit to China was his commitment to India. He made it absolutely clear to the Chinese regime that Beijing should strive to better its ties with New Delhi, failing which, there will not be much scope for friendly relations between Russia and China. According to the full text of the Joint Statement of Russia and China released by state-owned Xinhua news agency, Putin and Jinping pledged in the last paragraph that they would continue to cooperate within the framework of the “China-Russia-India” mechanism. Notice the intricate positioning of “China-Russia-India”. China has placed India after Russia, showing it places least importance to its ties with New Delhi.

But here’s the catch. The joint statement, published by the Kremlin, used the expression that the two sides “intend to develop cooperation within the ‘Russia-India-China’ format.” Compared with Xinhua’s “China-Russia-India” mechanism framework, Russia put “India” before “China.” That really tells you how Putin’s mission of showing China its place has been a roaring success.

Going by how short Putin’s visit was, and how he chose not to attend the dinner hosted by Xi Jinping – it would not be an overstatement to suggest that Russia is displeased with China. It must be remembered that Russia has silently been working as a mediator between India and China, and yet, Xi Jinping chose a PLA soldier involved in the violent Galwan valley clash with India as a torchbearer of the Olympic flame.

This was blatant politicization of the Winter Olympics, and it was not received well by Moscow. After China pulled such a distasteful stunt, India announced a diplomatic boycott of the Beijing Winter Olympics. It described Beijing’s decision to pick the PLA soldier as the Olympic torchbearer as “regrettable”.

India had desisted from announcing a diplomatic boycott of the Beijing Winter Olympics as a courtesy to Moscow. Yet, India was left with no choice after China decided to rope in politics to the Games, Ergo, making Russia exacerbate over Beijing. From a Russian perspective, China is the spoilsport. India was going to send a diplomatic representative anyway, but it was China who disregarded Putin’s role as a mediator between New Delhi and Beijing. Therefore, during his visit to Beijing, Vladimir Putin snubbed Xi Jinping left, right and centre.