Biden wanted to use Quad against Russia. PM Modi spoils his party 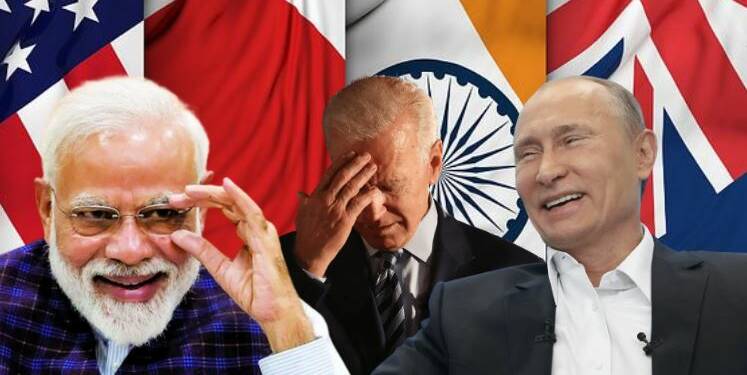 The United States, under the leadership of Joe Biden, has been trying to dilute the spirit and core aim of Quad for quite some time now. The Quad security grouping – comprising India, Japan, Australia and the United States came into being at a time when Donald Trump was still in office. So, the mandate with which Quad was formalised was simple – China needs to be contained. That was the sole aim of Quad, and of course, there were other issues relating to the larger security of the Indo Pacific region involved as well, all of which were again associated with China’s rising aggression.

When Joe Biden came to power in the United States, he attempted to change the dynamics with which Quad functioned. He tried making Quad a group which fought climate change, and not China. But such machinations of the Biden administration were swiftly, and decisively countered by other Quad member states. Soon, Joe Biden fell in line and Quad became a group that scared the wits out of China.

Yet, rising tensions in Eastern Europe, and the threat of Russia invading Ukraine has once again begun upending equations within Quad. The Biden administration now wants to use Quad as a platform to primarily counter Russia, and only then, deal with China. However, this approach is simply unacceptable to India, which views Moscow as an unapparelled strategic partner and friend. And that is the message which Prime Minister Narendra Modi is going to send through External Affairs Minister Dr S Jaishankar at the Quad foreign minsters’ meet in Australia.

India Will Not Allow Quad to Become an Anti-Russia Group

On January 31, India had abstained from voting against Russia at the United Nations Security Council. India had abstained from a vote on whether the United Nations Security Council (UNSC) should take up the situation in Ukraine as a possible threat to international peace and security. The development showed how India prioritised its ties with Russia and was willing to stand with Moscow on the Ukraine question.

There have been good times, and extremely bad years of Indo-US ties. But Russia has been a constant for New Delhi. Whenever India needed help, Russia has always risen to the task. Simultaneously, India called for an immediate de-escalation of tensions over Ukraine, reiterated its support for a peaceful resolution of the issue for long-term peace and stability, and appealed for quiet and constructive diplomacy.

Read more: India’s strategic abstainment in the UNSC is a grand friendship gesture towards Russia

This shows that India is not willing to let Russia become a punching bag for the world because NATO is unwilling to comply with Russia’s demands pertaining to Eastern Europe. New Delhi recognises the security concerns of Moscow, and by refusing to vote against it at the UNSC, had shown that India stands with Russia.

Interestingly, the Quad meeting of Foreign Ministers is reportedly being held at the behest of the Biden administration. Joe Biden wants to understandably spoil the party for a visible Sino-Russian bonhomie that was recently put on display by Vladimir Putin and Xi Jinping at the opening of the Beijing Winter Olympics. In a joint statement, Russia and China said they “oppose further enlargement of NATO” and called on the organisation to “abandon its ideologized Cold War approaches”.

Australia a Hurdle for Biden as well

Australia for one, has made it clear that it will not allow Quad to be used as a platform to discuss the rising tensions in Eastern Europe and the deteriorating ties between Russia and Ukraine. According to The Sydney Morning Herald, Australia is expected to raise the importance of not letting the Ukraine crisis distract the Quad’s priorities in the Indo-Pacific, including Beijing’s militarisation of the South China Sea and threats against Taiwan.

Australian Foreign Minister Marise Payne said a key focus of the Quad meeting would be to help countries in the region fend off coercion from other nations. She said, “Quad is a vital network of liberal democracies cooperating to give our region strategic choices, with a focus on practical steps to build the resilience and sovereignty of all states…by deepening partnerships at a time of strategic competition, threats to liberal international order and increasing uncertainty.”

It is therefore very clear that India and Australia are not going to allow the Biden administration to turn Quad into an anti-Russia grouping. New Delhi, under the leadership of Prime Minister Narendra Modi realises that China poses the single biggest threat to peace and stability not just in the Indo Pacific, but across the world today. At such a time, falling in Biden’s trap and beginning to speak against Russia instead of China would be foolish and a geopolitical blunder which India and Australia are not going to allow Quad to make.