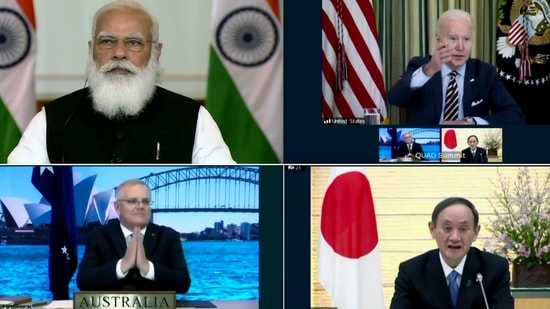 Merely a few months into power, US President Joe Biden has committed a huge blunder- turning Quad, the strongest anti-China coalition, into a useless group with no clear vision. Anyhow, India, Japan and Australia continue their anti-China tirade regardless of what Biden is up to.

When Quad was formed as an informal strategic forum comprising India, the US, Australia and Japan, the core idea was that the four maritime powers will coalesce in order to check China’s disruptive rise in the Indo-Pacific. But since Biden has always had a soft corner for Beijing, he has deviated the Quad from its real purpose.

Biden has been putting the burden of his own visionless political agenda on Quad. He has brought in issues like climate, critical technologies and Korean denuclearisation. While ideas like making Quad a vaccines powerhouse is still understandable as a means to counter China’s “vaccine diplomacy”, bringing in other issues like Korean denuclearisation, climate and critical technologies is an outright insult to the spirit and original purpose of what was intended to be an anti-China forum.

Anyhow, the other three constituents of Quad are not letting the broad vision of countering China in the Indo-Pacific fall prey to Biden’s machinations. They continue pushing back against China’s growing hegemony even though Biden tries to go soft on Beijing.

Japan and Australia, for instance, have been looking to boost their defence ties in face of Chinese belligerence in the Indo-Pacific region. In fact, Foreign and defence ministers from Japan and Australia reached an agreement on Wednesday to strengthen their security relationship in the larger backdrop of Chinese aggression that tends to concern both Tokyo and Canberra.

Moreover, a joint statement by the two sides also pointed out specific issues like “recent negative developments and serious incidents in the South China Sea” and human rights abuses by Chinese authorities in Hong Kong and Xinjiang.

Also, Japan has successfully managed to blunt Chinese aggression against Taiwan. Not only has Japanese PM Yoshihide Suga taken a tough stand against Chinese aggression but he also managed a joint statement with US President Joe Biden in Taiwan’s support.

Similarly, Australia too is not letting the China issue die down. Australian Prime Minister Scott Morrison himself pressed the G7 to mount further pressure on China ahead of the group’s summit. He is set to issue a warning about how the risk of conflict in the Indo-Pacific is growing with a spotlight on China’s rogue behaviour.

Meanwhile, India too remains China’s greatest adversary in the immediate vicinity of the Communist nation. And regardless of Joe Biden’s visionless approach to the region, New Delhi continues to push back against Beijing.

India has no qualms in becoming the common link that keeps all anti-China powers in the world glued together. Over the past one year, New Delhi has acted against China’s interests time and again. India is a part of the Supply Chain Resilience Initiative (SCRI) along with Japan and Australia. The SCRI is an attempt to exclude China from supply chains in the region.

Similarly, it was India that hosted Australia, Japan and the US as a part of the naval Exercise Malabar last year. The exercise was held in the Arabian Sea and signified New Delhi’s intent to bring together like-minded countries for challenging Chinese assertiveness in the Indo-Pacific.

India, Japan, and Australia have thus retained their strong sense of purpose to contain China even though Biden has devastated the Quad. The Quad may have become a victim of weak leadership in the US, but India, Japan and Australia have not got derailed in their bid to act against Beijing.