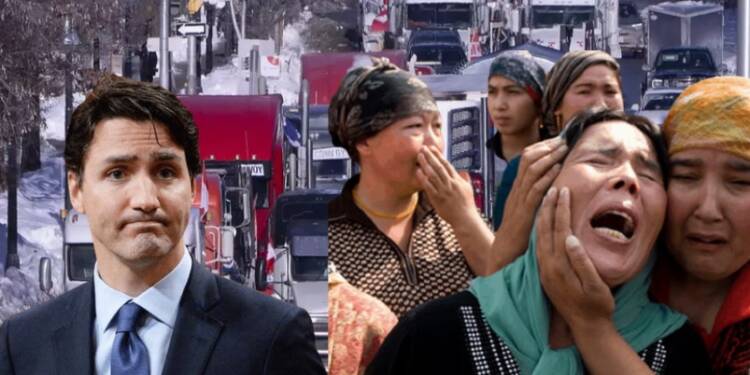 The Trudeau administration is currently facing the truckers protest rally, which has forced Justin Trudeau to shift from his home in Ottawa to an unknown secret location. The Trudeau administration has been trying all possible means to ignore and suppress this protest. This is not the first time that Trudeau is running away from a problem. Earlier too, he has ignored the real issues and demands of Canadian citizens. When it comes to taking important and hard decisions or facing challenging situations, the best Trudeau knows is to run away and hide.

In early 2021, when Canada‘s House of Commons voted to declare that China is committing genocide against more than 1 million Uighur Muslims in the western Xinjiang region, Prime Minister Justin Trudeau and his Cabinet abstained from the vote. When a leader of the Conservative party urged the government to press the International Olympic Committee to move the 2022 Winter Olympics out of Beijing, Trudeau hesitated at using the word genocide, which according to him was an extremely loaded term.

The legal siege on Trudeau

A newly filed Federal Court application alleged that by not doing more to stop China’s state-sponsored genocide of Uyghur Muslims in the Xinjiang region, Canada is ignoring its obligations as laid out in a United Nations convention.

This week, Canada’s Uyghur Rights Advocacy Project filed an application in Montreal. The spokesperson of the advocacy project, Mehmet Tohti said that the application aims to have a judge declare that a genocide is happening in China and also issue “any order or remedy” in response. Tohti said, “The Canadian government has an obligation to act and by staying silent, they are silently contributing to the Chinese government’s attempt to normalize the genocide”. Tohti added, “If successful, the application can cause serious implications for the Canadian government”.

If a judge declares that a genocide is happening in China, the Trudeau administration will have to act according to the UN convention, which specifies the signatories to prevent and punish those responsible.

Michael Chong, the conservative foreign affairs critic said, “the government should have already recognized a genocide in Xinjiang, based on existing credible evidence and because of the House of Commons motion last year”. He added, “it’s unacceptable that it has fallen to human rights groups, trying to force the Liberal government to act”.

Chong further said, “It’s a sad reflection on the lack of leadership coming from this government on international human rights when a non-governmental group has to take the government to court to uphold its obligations”.

Justin Trudeau and his government tried to ignore and suppress the Uighur genocide issue just the way they are doing with the truckers protest. But they failed to hide it and the old ghost is back here to haunt them. If the court recognizes the genocide in China (which it will most probably), it will be an extremely embarrassing and shameful moment for the Trudeau administration. However, the possibility of Trudeau realizing his mistakes and changing his policies still remain zero, just like the achievements in his political career.