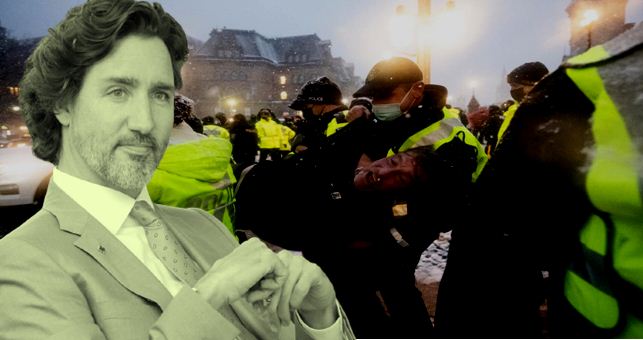 Since the declaration of national emergency in Canada, the Trudeau administration has indulged into a rampage mode on every single protester of the freedom convoy. He is also on a purge mission for people who donated or supported the protesters by any means. It looks like emergency powers have given wings to the Trudeau administration, to carry out whatever they wish to in a so-called democratic country like Canada.

Trudeau’s new plan to punish the protesters and their supporters

In a press conference on Saturday, the Ottawa interim police chief Steve Bell said, “Law enforcement will seek out protesters for financial sanctions and criminal charges even after protesters leave Ottawa”. He further said that law enforcement would go after individuals present at the peaceful freedom convoy protest in Ottawa for months to come.

Admitting that the police forces are collecting intelligence through police body cams, he said, “The intelligence will later be used to identify and track down the protesters and impose financial sanctions and criminal charges on them”. He added, “If you are involved in this protest, we will actively look to identify you and follow up with financial sanctions and criminal charges. Absolutely”.

Just a day before, on Friday afternoon press conference, Bell told reporters that the Ottawa police have made at least 70 arrests and towed at least 21 vehicles. Bell said, “We will run this operation 24 hours a day until the residents and community have their city back”. Officers from across Ontario and Quebec, as well as the RCMP, have joined Ottawa police in a bid to end the protests.

Several photos, videos and reports from the on-ground journalists have given direct shreds of evidence about the police brutality on the protesters, their supporters and the journalists as well. For example, the Ottawa police claimed that no gas was used on protesters, but video and photo evidence shows them using gas. Protesters have remained largely peaceful as police moved against them on Friday and Saturday, arresting over hundreds.

It all started on Friday morning when the Ottawa police service began arresting freedom convoy protesters in the downtown district. There are several disturbing reports about some officers carrying military-style weapons as they closed in on the three-week-long demonstration.

Recently, Chrystia Freeland, the deputy prime minister of Canada, shared details on how some Emergency Act powers will be made permanent. It proves that the Trudeau administration wants to end the democracy in Canada and enact a permanent police state.

Many Twitter users have started reporting about police brutalities. Several of them reported about the police officers in full combat gear with silencers equipped assault rifles, approaching unarmed protesters. One Twitter user said, “snipers are on the roof of multiple buildings”. Also, there are reports that protesters are holding the line as police begin mass arrests. Moreover, Twitter users shared that the police were spotted in armoured tactical trucks and even mounted police were called in.

It is surprising to see the kind of atrocities the Trudeau administration is enacting on the protesters. The brutalities of the Canadian police on the unarmed protesters is something never seen before in a peaceful country like Canada. Now, it remains to be seen, what will Trudeau do by making some Emergency Act powers permanent.

Trudeau’s use of emergency powers has already prohibited travel, banned protests, conducted widespread arrests, blocked donations, and frozen bank accounts of truckers and their supporters. People are getting angry, and there are even fears of possible civil war or a complete collapse of democracy in Canada.