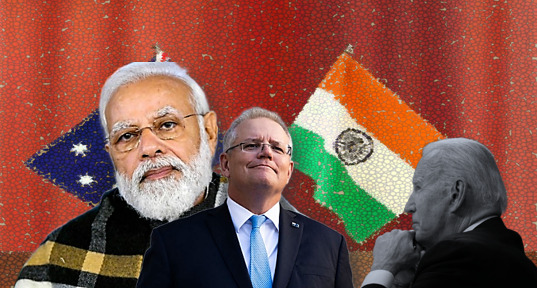 Australia doesn’t need to be told or forced by the Biden administration to do what is required with Australia’s interests. However, it doesn’t stop him from trying to act as a big brother and force his policies on the US ally. The United States is concerned about a proposal being explored by India, a fellow member of the “Quad” alliance, that would allow Russia to utilize its own SWIFT-style financial system for bilateral payments with the Asian country.

According to experts familiar with the situation, the Modi government is currently evaluating the suggestion to utilize Russia’s central messaging system, SPFS, to execute transactions with Moscow as India wants to buy oil and weaponry. The idea was announced as Russian Foreign Minister Sergei Lavrov arrived in India on Thursday for a two-day visit and as the Biden administration and the Morrison government held high-level trade talks on the Indo-Pacific strategy in Washington.

A shared desire to strengthen the Quad alliance between the United States, Australia, India, and Japan is part of that plan. When asked about the potential Russia-India banking alliance and its consequences for the Quad by The Sydney Morning Herald/The Age, US Secretary of Commerce Gina Raimondo replied that while she hadn’t seen the details, such a scheme would be “very upsetting” if executed.

As per analysts, because of its reliance on Russian armaments and the chance of purchasing cheaper oil if global prices rise, India is eager to continue trading with Putin. The Asian nation was a member of the Non-Aligned Movement during the Cold War, which refused to support either the West or the Communist East.

According to experts, because they were discussing classified conversations, the strategy now being explored would incorporate rupee-ruble-denominated payments. The concept, first reported by Bloomberg, calls for rubles to be placed in an Indian bank and turned into rupees, with the same system operating in reverse.

Australia-India relations on a consistent rise

After an online meeting with Modi two weeks ago, Australian Prime Minister Scott Morrison announced a series of trade deals with India. In his opening remarks, Morrison discussed the implications and consequences of the Russian invasion “for our own region in the Indo-Pacific and the coercion and issues we face here.” Prime Minister Narendra Modi’s government, on the other hand, has been defying Western pressure, especially from Australia, by claiming that arms purchases from Russia are necessary to confront China’s increasing military assertiveness.

As the government seeks to negotiate a deal less than two months before an expected May election, Australia is also on the verge of finalizing a free-trade pact with India. The Biden administration has tried to create a black and white scenario, one where you are either with us or against us. While Biden may want the allies to treat India with contempt in case it doesn’t fall in line, other countries including Australia understand India’s position very well and are not willing to toe Washington’s line.