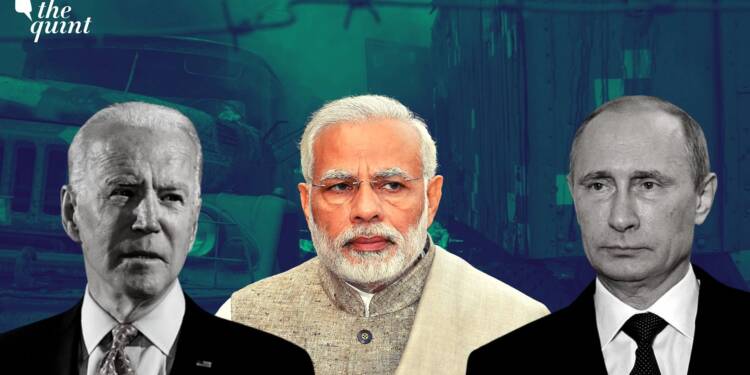 America calls itself a “friend” or “partner” of India. But do friends threaten each other with sanctions and consequences? Perhaps no! Recently, the US Deputy National Security Advisor Daleep Singh visited India, where he brazenly dropped a subtle threat on New Delhi. The US official said that there will be consequences for countries actively attempting to “circumvent or backfill” American sanctions against Moscow.

The visiting US senior official further said that India should not expect Russia to come to its defence in case China violates the Line of Actual Control (LAC). Well, the US was referring to the 2020 Galwan clashes between China and India here.

Now, this is some grave warning issued by Washington DC to New Delhi. The message being sent from the Biden administration is crystal clear—If India wants USA’s support against China, it must join its anti-Russia rally.

Frankly speaking, pushing New Delhi beyond a certain limit will have serious ramifications for the US-India ties. For the US to safeguard global peace and order, it can’t afford to bind its China policy to India’s policy towards Russia. China is a common threat for both India and the US while Russia isn’t. New Delhi considers Moscow as a strong strategic and defence partner. If the US thinks that it can punish India by letting China have its way in the region, it’s highly mistaken!

How Trump made India a key partner?

The former US administration under Donald Trump had a clear agenda in its mind—to stand up to China’s hegemonic attitude. Trump, in this process, forged closer ties with major global powers like India, Japan and Australia. Thus, the Quad security dialogue was revived.

Today, we have a very weak and suicidal administration in the US. Blinded by its hate towards Russia, the Biden administration is even willing to debilitate its ties with a key partner like India.

Suppose the US today imposes sanctions on India merely for purchasing Russian oil, the worth of which is hugely dwarfed by the amount of gas trade between the EU and Russia, the US-India strategic partnership will be damaged beyond repair. Only, the Biden administration will be responsible for that!

The West’s hypocritical criticism of India on the Russia question

Indeed, India’s trade ties with Russia have effectively softened the sanction blow on the Russian economy. But that’s also true that the EU purchases gas worth 1 billion Euros every day from the Russian federation. Doesn’t that help the Russian economy? Of course, it does! But even then, some European powers like Germany and the UK have the audacity to lecture India over the Russia question. India, a country of 1.4 billion people, needs to secure and stabilize its energy supply chains to steer clear of inflation and high food prices.

India’s minister for external affairs Dr S Jaishankar recently ripped into India’s critics for its oil trade with Russia. He said, “When oil prices go up, it’s natural for countries to look for good deals for their people. But I’m pretty sure if we wait 2-3 months & look at the big buyers of Russian gas & oil, I suspect the list won’t be any different than what it used to be & we won’t be in the top 10.”

When oil prices go up, it's natural for countries to look for good deals for their people. But I'm pretty sure if we wait 2-3 months & look at the big buyers of Russian gas & oil, I suspect the list won't be any different than what it used to be & we won't be in the top 10: EAM pic.twitter.com/YuFhA4hVhW

Yes, dear America, did you hear that? India is just prioritizing its interests. And when we come to China, it isn’t India’s problem alone. So, by standing up to China, the US won’t be doing any favour to India. It would be acting in its own interests only. That’s why the Trump administration was so keen on keeping India on its side to contain China. India remained a key pillar in Trump’s anti-China strategy. But sadly, Biden is undoing all his efforts now. The alliances, the fronts and the coalitions that Trump made against China are being dismantled by the senile Biden administration.

“Enough is enough,” Japan finally says no to warmongering by Biden to counter China