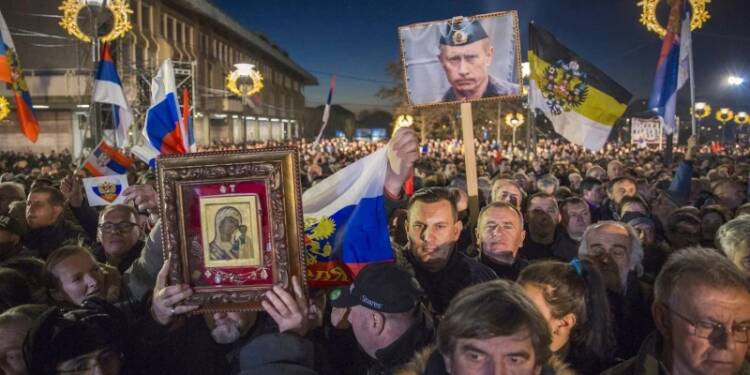 It does not matter if your country is a democracy or an autocracy. In Serbia, for instance, the lines between the two models are blurred. Serbian President Aleksandar Vucic is facing an election and is expected to win it rather comfortably. The victory would mark another five-year extension of his already 10-year-long rule. Aleksander Vucic is an interesting man. For the past three years, he has been trying to replace Russia with China.
What this means is that Vucic has been working to cut dependence on Russia, and foster stronger ties with China. But China cannot help Aleksander Vucic win elections. For that, he needs Russian President Vladimir Putin. Here’s why.

You see, Serbia is not like any other European nation. In Serbia, Russian President Vladimir Putin is a sensation. He’s on the walls of streets, on mugs and on t-shirts. Putin is the man Serbians look up to. He is who they admire, and he is who they desire. Putin’s strongman image is what gives them inspiration. His standing up to the West acts as a cherry on the topping. Putin wields power in Serbia. In a country dominated by Slavs, who see themselves as a part of the larger Russian family, Putin is a factor that can swing elections. So, for any leader to come to power in Belgrade, it is a prerequisite for them to be in the good books of the Russian president.
Aleksander Vucic realised this late, but he did eventually come to terms with the fact that decoupling with Russia and then fighting elections in Serbia is not a viable political strategy. Now, the man is using the war in Ukraine to convince the Serbs that he is their best bet moving forward. Moreover, his regime is seen siding with Russia in the ongoing war. Much of the pro-Russia sentiment among Serbs comes from their hatred of NATO; which bombed the country in 1999 to stop a crackdown on ethnic Albanians seeking independence for Kosovo. Now, Kosovo’s membership in the United Nations has been blocked by Russia. But if Vucic’s regime decouples from Moscow, or takes an anti-Putin stand, the Russian President would essentially clear the way for Kosovo to be made a UN member. That would be a geopolitical disaster for Serbia.

China Awaits a Kick-Out from Serbia

Aleksander Vucic does not really have much of a choice. If he does win the elections, it would be solely due to the fact that his government took a pro-Russia turn right before the elections. This is not good news for China. The Communist nation has invested billions in Serbia. Chinese companies operate in Serbia and exploit their workforce and resources without any checks and balances. The people of Serbia have always been anti-China. In fact, they have held massive protests against Chinese involvement in their country’s strategic sectors, especially in mining.
Read more: Why did the  Western sanctions on  Russia fail?
So, when Vucic does return to power this time, it will be on the heels of him embracing Vladimir Putin’s Russia. The people of Serbia will expect him to kick China out of their country, and grow closer with Moscow. Thousands of people in Serbia have turned out for pro-Putin rallies during the war, waving Russian flags and displaying the letter Z – a symbol seen on Russian military vehicles in Ukraine. Ultimately, the people of Serbia are controlling Belgrade’s foreign policy. If Vucic does not stick with Russia, he will be thrown out of power by the people. In a choice between political relevance and China, the man will obviously choose the former. When seen from a strategic viewpoint, Putin has just kicked Xi Jinping in the shins once again.
Tags: ChinaPutinRussiaSerbiaSerbia-Kosovo conflct
ShareTweetSend
Previous Post