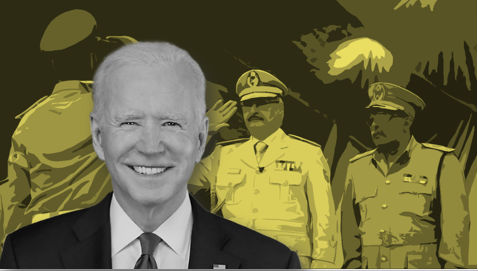 With two governments, two leaders, two parliaments, and no constitution; the current situation in Libya vehemently speaks of the grave political dispute the nation currently sits in. Mired in conflicts between two staunch rivals, the oil-rich country is back in media highlights amidst the ongoing Russia-Ukraine war.

Haftar vs the Government of National Unity

The country currently has two prime ministers. One is Fathi Bashagha, who is backed by the warlord General Khalifa Haftar; the other is the interim Prime Minister Abdul Hamid Dbeibeh, who is backed by the UN-based Government of National Unity. Haftar is a strong political force in the country, with backing from external forces like Russia, France, and the UAE.

And that explains USA’s renewed interest in toppling the Haftar-backed leader in Libya to undermine Russia’s influence in the country. Make no mistake, the US also has its eyes firmly set on the rich oil reserves of the country that it can easily use to help the EU reduce its dependence on Russian oil imports.

US moves to undermine Haftar’s hold over Libya

Al Araby recently reported that in a significant pivot, the US is now changing its strategy in Libya and is eying to bring the two rival Prime Ministers to the table. This is significant because the US has, in the recent past, granted support to the Haftar-backed government under pressure from allies like Egypt and UAE. But, the Biden administration is now revitalizing its political ties with the UN-based Government of National Unity, which is led by interim Prime Minister Abdul Hamid Dbeibeh.

This is a major shift in USA’s policy, which sends a warning to General Khalifa Haftar. USA’s sudden pivot against Haftar is driven by the latter’s blatant support of the Russian invasion of Ukraine. Haftar recently announced that his fighters would join the Russian military in Ukraine to help Moscow eliminate its rivals in Ukraine. Moreover, Russia has also supported Haftar’s military operations in Libya in the past through its private militia called Wagner Group mercenaries.

USA set to anger its major allies in the process

It’s true that the Haftar regime in Libya is in bed with Moscow and takes diktats from the Kremlin lying down. However, pursuing the Libyan crisis through the prism of the Russia-Ukraine crisis could severely hamper the USA’s overall interests in the region. For instance, the Haftar regime is also backed by some powerful regional Arab players like Egypt and the UAE. Moreover, France has also provided the Haftar regime with military and diplomatic support.

And more importantly, some European powers also harbor a soft corner for the Haftar-backed regime in the country given Abdul Hamid Dbeibeh’s close ties to Turkey and its President Recep Tayyip Erdoğan. The Government of National Unity is fully backed by Turkey, which poses a national security threat to nations like Greece and Cyprus.

UN-backed government abhorred by all US regional allies

For those unaware, the Tripoli-based UN-backed government 2019 had signed a maritime deal with Turkey to establish an Exclusive economic zone in the Mediterranean Sea, which had invited a fierce reaction from Greece and Cyprus. These European nations alleged that the deal between Libya’s UN-backed government and Turkey violated their maritime boundaries.

Simply put, the UN-backed government in Libya is abhorred by almost all significant players in the region barring Turkey. The Biden administration, by throwing its weight behind Abdul Hamid Dbeibeh, may succeed in undermining Russia’s interests in the region; however, it could very well lose support from major US allies like the UAE, Egypt, France, and Greece in the process. Thus, Biden’s move to undermine the Haftar-backed regime in Libya is a short-sighted and suicidal move, which will only help Russia strengthen its presence in the region.