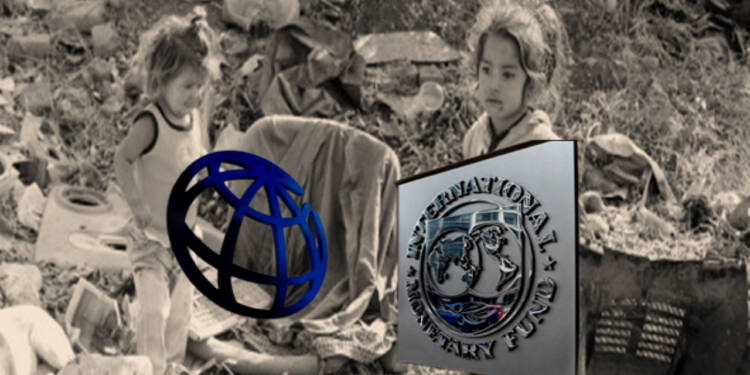 International Monetary Fund and the World Bank; Why does the world need them? Well, their topmost agenda is to eliminate poverty from the face of the earth. IMF works to stabilize the global monetary system through its policies, while the World Bank’s goal is to reduce poverty by offering assistance to middle-income and low-income countries.

But this is about to change. Rich western nations are now hijacking these organizations to further their green agenda. Hence, eliminating poverty is no longer their topmost priority; instead, imposing green policies on the world’s poorest is!

Foreign Policy recently reported that IMF and the World Bank “are under pressure from their rich donor governments to sideline economic development and poverty reduction—and shift focus to reducing carbon emissions.” For instance, the Biden administration stated that the World Bank should be at the forefront of cutting emissions and minimising support for fossil fuels.

Under new guidelines released under pressure from nations like the US, Germany and Sweden, a poor country will get financial assistance from these organizations only if they vow to introduce climate-friendly policies at home.

The World Bank recently unveiled a climate action plan declaring to align all future projects with the Paris Agreement to slash emissions. Similarly, IMF has promised to create a $50 billion Resilience and Sustainability Trust to help poor countries tackle climate change, where financial assistance would be contingent on recipient countries’ plans to reduce emissions.

Now, suppose a poor country wants the World Bank to fund a gas pipeline project that would enable millions of poor to access the low-carbon fuel. The World Bank would simply shoot down the request. As per Foreign Policy, the World Bank is no longer funding the exploration, development, production, or transportation of gas in the developing world.

Not only this move is unjust, but ineffective and disastrous too! Firstly, rich nations that are arm-twisting these organizations to impose their green agenda on poor nations are themselves the biggest carbon emitter in the world. Back in the 1700s and 1800s during their economic revolutions, countries that are referred to as ‘developed’ today made the world a gas chamber. Now that the developing nations around the world are doing the same, albeit in a much more environment-friendly manner, the West is outraged.

Who is responsible for the global climate crisis?

Countries like the United States and China, which have talked much about green energy and presented policies to become carbon neutral, are lagging behind the goals set in the Paris Climate Agreement. As per 2018 carbon emissions data, China tops the list with 10.06 Gigatons, the US fares second with 5.41 Gigatons.

Poverty reduction is central to human development. Poor countries don’t have industries, they lack good infrastructure, their people suffer starvation and thus their contribution to today’s climate crisis is absolutely negligible. Should they be deprived of luxuries that the West has been enjoying for decades only because they are poor and lack power? Should they be punished for crimes that they never committed; instead, the West did? Rich nations actually think the poor should pay for the sins that they committed themselves.

Read More: China pledges to reduce carbon emissions but only for itself. Jinping is heavily financing coal plants around the world

Punishing the poor to please the West

The irony is that these poor nations have the least means available to mitigate the effects of the climate crisis on their people. Shifting to greener energy requires a great amount of investment and poor nations simply can’t afford them. On the other hand, rich nations have the means to nullify the effects of the climate crisis on their population. As per the Foreign policy article, nothing illustrates this better than the rapid decline in deaths from weather-related events—such as floods and storms—in developed countries.

More than 3 billion people still live on less than $5.50 a day. An increase in poverty will only worsen the impact of climate change on the world because the poor are the most vulnerable. With this shift to climate change away from poverty alleviation, we should expect the poverty level in the world to surge at a dangerous rate. IMF and the World Bank are thus leading the world to penury only to please a few elites of the Western world.