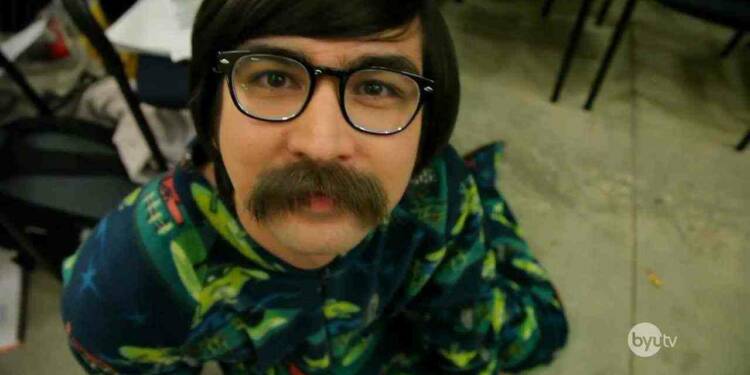 Jeremy Warner is a sketch comedian, actor, filmmaker, and director most known for his mustache and his involvement in Studio C, a popular comedy show on BYUtv and YouTube.

Jeremy Warner was born in the city of Idaho Falls in the state of Idaho. Warner elected to attend BYU for a year after high school graduation before serving as a missionary for the Church of Jesus Christ of Latter-day Saints in the Tulsa, Oklahoma Mission.

He returned to BYU after finishing his two-year mission and received an undergraduate degree in Film. He was a member of BYU’s on-campus sketch comedy troupe, Divine Comedy, while at BYU. It was there that Warner and the other founding members of Studio C first met and created the show’s concept. Jeremy Warner is presently married to Catey Joy Warner and has three children: Felix Nicholas, Linus Brian, and Blythe Karen. He lives in Provo, Utah.

Jeremy Warner is instantly recognised thanks to his distinctive (and honestly, enormously remarkable) beard, but there’s much more to the man than a fashionable beard, no matter how frequently it comes up in conversation. He was always dreaming of making it big as a certified dude who loves brisket, hamburgers, and pizza (perhaps all at the same time) and was never a lover of Statistics in school. It’s easy to say Jeremy accomplished everything he set out to do – and then some.

Jeremy met other members of the legendary Studio C group during his stint with Divine Comedy. They collaborated here and came up with concepts that would subsequently be included in the performance. The show first aired on Brigham Young University’s BYUtv in 2012, and it eventually gained popularity through streaming on YouTube, allowing the group to reach a wider audience.

Jeremy joined Studio C as a recurrent cast member before being promoted to a full-time member of the group in the fifth season. In addition, from 2012 to 2014, he worked as a writer for Studio C before being elevated to staff writer until the show ended in 2019.

Some people may be pleased with their lot in life, having found success as members of a sketch group whose work can be found all over the world. Jeremy, on the other hand, isn’t one to sit idle. Jeremy has appeared in a variety of shows during his days at Studio C, including the comedy special “Peculiar People” and a single episode of “The Adventures of Ravi.” He played himself in both of these roles.