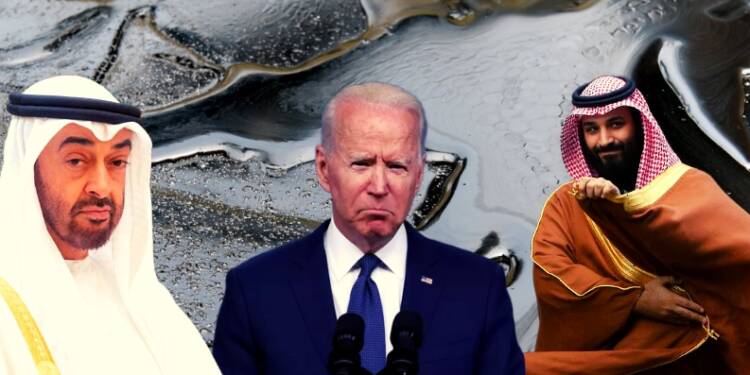 Joe Biden has had a rather distinguished presidency so far when it comes to getting humiliated by world leaders. For instance, it has been widely reported that Saudi crown prince Mohammed Bin Salman (MBS) and Abu Dhabi crown prince Mohammed bin Zayed Al Nahyan (MBZ) have been ghosting Joe Biden. They have been refusing to take calls by Biden, and have also rejected the White House’s repeated appeals to increase oil output in order to cool gasoline prices around the world, especially in the United States.

You see, inflation is going out of hand. Americans are feeling more than just a pinch in their wallets now. Gasoline prices in the US have skyrocketed. And this is putting severe inflationary pressure on the American economy. Inflation in the US has already touched a four-decade high. The Biden administration egotistically ordering Arab kingdoms to do as it commands them has not really panned out as expected.

MBS – the Real Deal and the Toughest Nut to Crack

Joe Biden might soon apologise to the Saudi crown prince, who he has been snubbing for the past two years. Whether it be trying to incriminate MBS for the murder of Jamal Khashoggi or for his regime’s human rights record – Joe Biden has placed the Democrats’ far-left agenda over and above America’s national interests.

According to a letter that has been circulating on the Hill, House Democrats are frustrated with Joe Biden’s handling of Saudi Arabia. They have accused the Biden administration of pretending to go hard on Riyadh, while secretly having a very accommodative stance for the Saudi kingdom.

What that tells you is that the Biden administration’s bravado against Saudi Arabia was fake and that the White House has secretly been pleading with Riyadh to comply with its requests, which not until very long ago, had diktat-like tones to them.

But Saudi Arabia, and MBS in particular, is infuriated. He has had just about enough of Joe Biden and his lunacy. Therefore, it will not be surprising if Joe Biden actually tenders an apology to MBS for his outrageous behaviour against the Saudi kingdom and Royal Family over the past two years. And then, there is strong precedence to suggest that Biden might just end up apologising to the de facto ruler of Saudi Arabia.

Already, as reported by TFIglobal, Secretary of State Antony Blinken apologised to Abu Dhabi Crown Prince Mohammed bin Zayed last month. As per Axios, the Emiratis were disappointed by what they saw as a weak and slow U.S. response to the incessant Houthi attacks on their soil.

Blinken, therefore, admitted during his Morocco meeting with MBZ that the U.S. indeed took too long to respond. However, the apology by Blinken was in fact, an attempt to fix nosediving ties with the UAE. The Biden administration wants UAE, and the Arab world led by Saudi Arabia to increase oil output drastically. The apology to MBZ was aimed at wooing UAE to favour the United States once again.

Read more: Let us tell you the “oily secret” behind Blinken’s apology to UAE

With the midterms fast approaching, skyrocketing inflation promises to sink the Democrats’ electoral ship for good. To stand a fighting chance in the elections, Joe Biden will most likely bend the knee before Saudi crown prince Mohammed Bin Salman, thus culminating his two-year-long futile campaign against a country that controls America’s energy security.