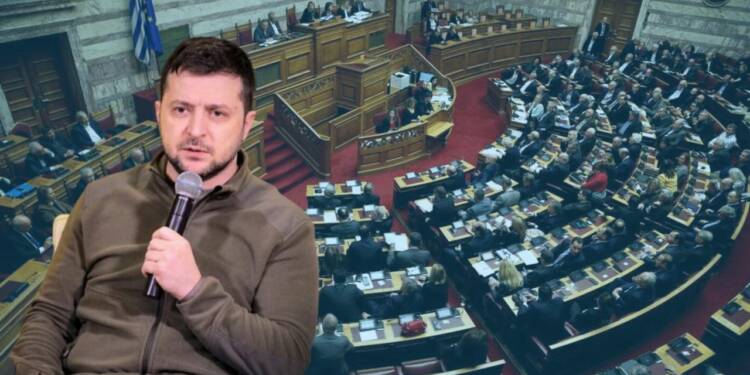 Whether it is Washington or Tel Aviv, Volodymyr Zelensky was earning plaudits for his marathon run addressing parliaments across the globe to garner support for the interminable Russo-Ukraine war. The former comedian is currently putting his bet on technology and has been fortifying his stand through video addressing with big calls to save the sinking ship that is Ukraine.

Zelensky’s small triumphs with his video conferencing received adulation from all stripes of politicians but when it came to Athens the ‘lion of Kyiv’ stumbled. The Ukrainian president’s high rhetoric never hit the right chords with the Greeks as the MPs in large numbers staged a walkout from the parliament accusing Zelensky of betraying the goodwill of the Greek people. The greek outrage had its reasons and probably it would be curtains for the long hauled video antics from the Ukrainian president.

Read more: Zelensky under heavy fire in Israel after likening the Ukraine war to Holocaust

The Azov battalion is an armed group of fighters, known for the ruthless purges they get embroiled while in combat. The armed group of fighters has been previously accused of dastardly acts in Mariupol with innocent killings of civilians in large numbers. For the Greeks, it’s frustrating enough to allow space to such lethal fighting groups who go killing on a whim. The volley of charges against the Azov also has the killing of more than 1, 20,000 Greek civilians in Mariupol.

The Azov soldier in the video message said: “I was born in Mariupol, and I take part in the defence of the city from the Russian Nazis. I will not talk about the difficulties we have in defence, participating through the Azov Battalion. This is my debt to my city, my debt as a man and I must talk about the catastrophic conditions in which the Greek Mariupol is experiencing.”

Ukraine has long vouched to fight against authoritarian forces in Russia and the same government has shockingly undermined the democratic values espoused by the Greeks, by giving space to a vile group of fighters that have a record of crimes committed against the innocent Greeks.

“The Greek government irresponsibly undermined the struggle of the Ukrainian people, by giving the floor to a Nazi. The responsibilities are heavy. The government should publish a detailed report of preparation and contacts for the event,” commented former foreign affairs minister Nikos Kotzias.

In the aftermath of the shocker from the Ukrainian president, Greece has decided to give an abrupt close to its gesture politics with Ukraine. The rogue attempt from Zelensky was condemned by both the opposition and the ruling party members in Greece and the sudden unison spirited Prime Minister Kyriakos Mitsotakis to change its old diplomatic tunes with Ukraine.

Greece has decidedly put an end to supplying weapons to Ukraine, the ministry of defence informed. The ministry informed about the dearth of weapons as a reason for the sudden halt in aiding Ukraine’s long fight. Also to note that Greece was among the first nation in Europe to supply a handful of artillery to Kyiv in a response to the Russian intrusion.

The Greek explanation of the present policy reversal holds no water. Zelensky needs to leave behind the hubris and head back to the negotiating table in Athens to set things back for the madness that he committed. Till then Athens will sit back and see the fight unfold.