American Navy – Chinese quality; Only one man to blame for it 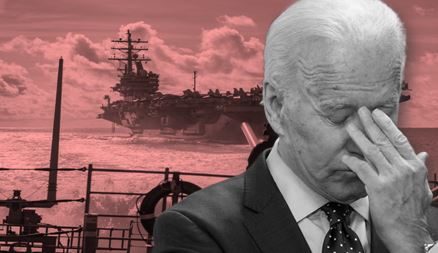 Despite Russia’s assertions that its naval flagship Moskva caught fire accidentally, US authorities claim that the ship was hit by two Ukrainian Neptune missiles, killing an unknown number of sailors and bringing the ship and its weapons to the bottom of the Black Sea.

The sinking of the Moskva was a major setback for the Russian fleet. However, it is also a serious warning to US Navy warships, which have been at their worst for some time.

The sinking is a magnificent example of modern warfare, in which missiles fired from shore may destroy even the most powerful and largest ships. The US Navy’s capacity to defend the nation’s important security interests is “marginal,” with the caveat that its capability and readiness scores are slumping down.

Despite the deteriorating condition of the US navy, the White House appears to be completely ignorant of the situation, dismissing several catastrophes and engaging in trimming down the Defense Budget instead of investing in its modernization.

Deteriorating Conditions Over The Years

It’s complicated for Americans to take some satisfaction with the Moskva sinking since the US fleet could be more vulnerable than anyone’s expectation.

There have been a series of reports indicating that the US Navy is overstretched, overworked, and under-maintained, and thus increasingly vulnerable as it goes about the expensive task of patrolling the world’s ocean.

The deterioration in surface military preparedness, particularly a decline in ship material readiness, was highlighted in high-profile evaluations in 2010 and again in 2017. The Navy does not even have enough spare components to maintain its ships.

Who can forget the incident of 2017? The USS Fitzgerald was lost in a collision, killing seven sailors. If the navy’s conditions remain as they are, major incidents may occur. USS John S. McCain was also towed out to sea. The sailors at the time cautioned that a major incident was only a matter of time. According to a report by the Government Accountability Office, the US Navy sailors are having difficulty getting enough sleep due to overtime. The naval men are overburdened.

Navy on the verge of strategic bankruptcy

A strategic bankruptcy is being generated unknowingly, and it is tarnishing the prospects of the US navy even more. The Pentagon is facing a budget cut after a $715 billion military budget was adjusted for inflation last year.

The Navy which is already short of the 355 ships it needs to build by 2034 is now in need of modernization. The US fleet isn’t large enough to meet global requests for naval forces. The fleet doesn’t pass the safety test, and it can’t immediately surge in an emergency due to frequent deployments and maintenance backlogs.

Whereas, Concerns have been expressed about the vulnerability of America’s carrier-based fleet to a new generation of Chinese anti-ship ballistic missiles. And if proved that the Ukrainians used their new Neptune missile to destroy the Moskva, those issues will become even more pertinent.

Today, China’s aggression is a clear threat to the free world. The democratic world has put its faith in the US Navy to combat the paper monster in the South and the East China Sea. Regrettably, the United States Navy is itself becoming a Chinese Quality Product, with a grim future when it comes to modernization.