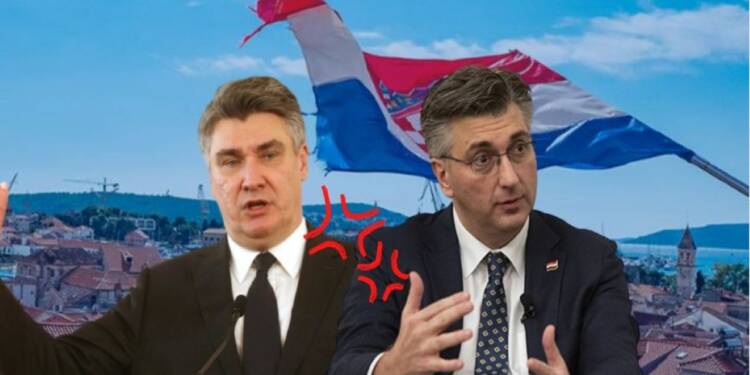 The invasion of Ukraine by Russia has been roundly condemned by the Western world, which has imposed heavy sanctions on Russia as a result. The case of Croatia, on the other hand, is quite amusing. Andrej Plenkovi, Croatia’s prime minister, has continued to take harsh steps against Russia. But there’s a catch: the Croatian president has consistently expressed his unwavering support for Putin’s Russia. As a result, the Prime Minister and the President have been at odds.

Now, PM Plenković has announced that he will cut ties with Croatian President Zoran Milanović because of his pro-Russian stance. He additionally asserted that Milanović is a pro-Russian figure and that he has no idea whether Zoran is the President or a Russian agent. He also added that Milanović has done a tremendous amount of damage to Croatia in foreign relations during the previous two months.

Milanović, on the other hand, seems indifferent about the charges levelled at him. “Unfortunately, it so happened that I had to call them a gang, which they are because they have been sentenced for it,” Milanović said during a visit to the Klovićevi Dvori Gallery in Zagreb.

With the Croatian PM being a pro-European, left-leaning politician with no history of clashing with NATO, the President’s unabashed support for Russia has led to incertitude in Croatia’s foreign policy. Due to two conflicting poles of authority, Croatia’s government looks to be in flux.

Since the start of the Russia-Ukraine conflict, Croatia, a member of the EU, chose to support Ukraine. Thus, Milanovic’s critique of the West for “warmongering” over Ukraine astounded everyone. Milanović warned NATO against expanding eastwards and indicated that he will continue to oppose the expansion till his last breath.

Those who advocate the expansion of NATO to Ukraine endanger the interests of Croatia, a member of NATO, and “because we are in NATO, someone could send our people there tomorrow,” Milanović said, referring to the tensions between Russia and Ukraine.

Furthermore, during a visit to Switzerland, the Croatian President stated that sanctions placed by Western countries on Russia will not stop the war in Ukraine. He further said, “having followed the stock exchange in Moscow and the Ruble that has returned to the level of a month ago in relation to the dollar, I had concluded that as in every such case, it unfortunately only encourages thugs.”

The President even blamed Volodymyr Zelensky for the war, calling him a thief who puts the lives of innocent Ukrainians at risk. “Ukraine is one of the most corrupt countries in the world, it is economically stagnating and hasn’t gotten anything from the EU,” he further added.

PM Plenković never agreed with Milanović’s position on the ongoing war between Russia and Ukraine. In Parliament, the Croatian Prime Minister  stated that Zoran’s damage to the Croatian interests in Bosnia and Herzegovina will not be washed away by “neither the rains of Mostar nor the Niagara Falls.” Furthermore, Prime Minister Andrej accused the President of continuously and deliberately pushing some Russian agenda, dissolving Croatian institutions, and called his statements regarding the war in Ukraine disgraceful.

Consider what will happen if two of the nation’s highest officials fight? How will the country’s policy be carried out?  This is exactly what is happening with the Balkan nation. The country’s President attempted to avoid war. PM Plenković, on the other hand, went ahead and took on Russia, kowtowing to the US demands. The country is currently in a scuffle as the decision-making powers are fighting with each other.  Croatia is thus a supremely confused nation.