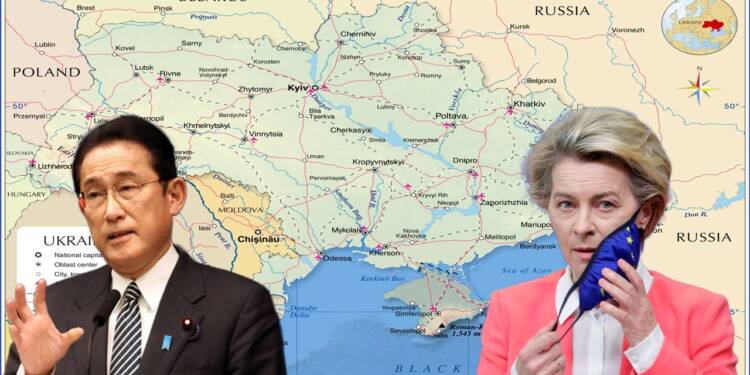 The European Union is currently in a poor position. Most of its members are opposed to the recently planned Oil Embargo, and the stronger nations want smaller countries to keep their mouths shut. In midst of the chaos, the Bloc had the vision to rebuild Ukraine by a ‘Marshall Plan’ trust.

While it was expected that European countries will contribute their fair share of financial aid to this trust, the EU has rushed to an Indo-Pacific nation to seek assistance.

The ‘Marshall Plan’ trust was laid by the International donors at a conference in Warsaw last week, pledging more than 6 billion euros ($6.3 billion) to support the war-torn Eastern European nation.

The EU asks for money from Japan

Earlier this week, the European Council President Charles Michel issued a call to Japan. The call was to seek contribution from Japan, a non-European nation for Ukraine’s humanitarian, administrative, and reconstruction needs.

The European Commission President Ursula von der Leyen and Charles Michel even met with the Japanese Prime Minister Fumio Kishida in Tokyo to discuss this matter.

Michel believes that there’s a mutual interest in rebuilding Ukraine. Moreover, he said he looks at the other like-minded nations for co-operation in the trust. The EU is also working with the World Bank and International Monetary Fund to fund the trust.

Did you catch the hypocrisy here? Not one European Nation has funded this trust. And trust me, Europe won’t even be satisfied with a few billion. It eyes at least Trillions in the trust.

Read More: How EU’s new sanctions on Russia could end up making Putin even stronger

Technically, only the European nations should pay

Technically, it should only be the EU paying for rebuilding Ukraine. None of the non-European nations has any business or even shares a border with Ukraine.

Europe has repeatedly stated that it is committed to Ukraine, even since before the war began. However, their actions say otherwise. The Bloc has denied fast-forwarding induction of the country to the EU. There have been constant delays in the military and humanitarian aid from different EU nations, and now the creation of this fake trust.

Meet the next Chinese President, a friend-turned-foe of Xi Jinping