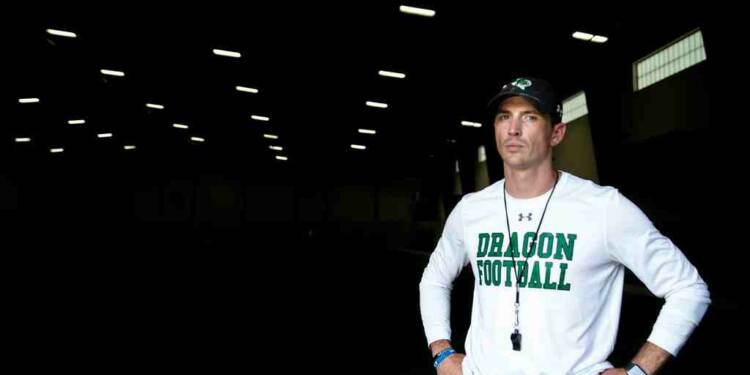 Riley Dodge is an American football coach and former player. Since 2018, he has been the head coach at Carroll Senior High School. Austin Westlake High School’s head coach is his father. In this article we are going to talk about the biography, career, notable works, games and family of Riley Dodge so read the article till the end.

Dodge attended Carroll High School in Southlake, Texas, where his father and subsequently Hal Wasson coached him. Dodge was a backup quarterback for Greg McElroy of the Alabama Crimson Tide. In Todd Dodge’s patented no-huddle spread offense, Dodge gained 4,184 yards and 54 touchdowns passing and 1,119 yards and 13 touchdowns rushing as a junior.

In 2006, Southlake Carroll defeated Austin Westlake 43–29 to win the 5A Texas state championship.

Dodge passed for 3,445 yards and 39 touchdowns as a senior for coach Wasson in 2007. Southlake Carroll’s 58-game winning streak against Texas clubs came to an end in the regional quarterfinals against Abilene.

Dodge was appointed as a quality control quarterbacks coach at The University of Texas on April 16, 2013.

Dodge began his high school coaching career in February 2015, when he joined the varsity coaching staff at Flower Mound Marcus High School in Flower Mound, Texas, as the offensive coordinator and quarterbacks coach.

He was the offensive coordinator for the Marauders from 2015 to 2017, not only honing his coaching talents but also turning around a Marcus program that had been average in previous years to one that continues to win local and state awards year after year.

Despite the fact that Dodge has moved on, the Marauders continue to compete for district titles and are now an annual 6A playoff team.

Dodge’s attacking plan is one that the Marauders still employ today.

Dodge returned to his alma mater, Southlake Carroll High School in Southlake, Texas, in April 2018 to take over as head coach. Since becoming Carroll’s head coach, Dodge has guided the Dragons to the state playoffs every season and to the Texas UIL Class 6A Division 1 State Championship game in 2020.

Dodge verbally committed to play for Mack Brown in February 2007 after growing up as a Texas Longhorns supporter. He later changed his mind and signed a letter of intent to play for his father at the University of North Texas.

He started at quarterback for North Texas before switching to wide receiver. He declared his plan to leave North Texas in January 2010 and enrolled at McNeese State University in Lake Charles, where he had two years of football eligibility remaining.

Riley Dodge was born on October 12, 1988, in McKinney, Texas in the United States.

Todd Dodge is his father, and Elizabeth Neptune Dodge is his mother, the daughter of former Westlake Head Coach Ebbie Neptune.

He is married to Alexis Havens Dodge and the couple has 3 kids namely Tate, Landry & Blakely.

What is Dodge Riley salary?

Riley Dodge, the new head coach at Southlake Carroll, is earning $97,284 a season.

Who is the head coach at Southlake Carroll High School?

We hope this biography article of Riley Dodge will be helpful for you to understand his journey and works.