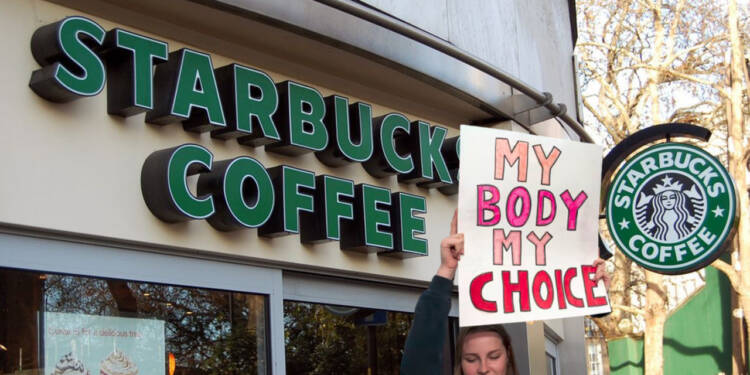 Do you know what makes the Left ideology so loud and assertive? Is it the left-leaning and far-left activists? Well, no. Everyone knows they are propagandists. Is it the popular, biased artists? Well, no. They are just actors and nobody really cares about what they have to say.
It is the billionaires and the rich corporates who perpetrate the ‘so-called’ values of the left ecosystem. They pump in Dollars that you give them into furthering the left-liberal agenda.

Take the case of abortions. Leftist companies are clearly backing the pro-abortion movement even though Americans want the corporate to remain apolitical. This is an assault on the freedom of Conservative thinkers and now it is time for the Americans to learn something from the Indians and scare these big companies

How American companies are taking sides

We normally expect companies to run their business and at the most get into a bit of social activity. However, they have kept getting into leftist propaganda in a desperate bid to promote the left-liberal agenda.

Amidst the ongoing abortion debate in the US, it is becoming apparent that some Red states could restrict abortions if the US Supreme Court strikes down a previous judgment permitting the practice. So, these companies are saying that they will help employees move to other states for carrying out abortions. Several large companies with employees located in places in Texas and Oklahoma have promised to preserve access to abortions in the event of their criminalization.

The list includes some big companies like Citi, Apple, Yelp, and Amazon are categorical including abortion in the expansion of their existing benefits programs to reimburse travel allowances for seeking medical care outside their states.

But let us be very clear about one thing- they don’t want businesses to take a political stance. A survey conducted by the Convention of States Action in partnership with The Trafalgar Group, asked likely voters, “How likely are you to stop using a product or service of a company that openly advocates for a political agenda you disagree with?”

And it is the Republicans who seem more aggrieved. A total of 93.4% of Republican voters said that they were likely to stop using a product or service of a company that advocates a political agenda with which they disagree.

Convention of States Action President Mark Meckler said, “The progressive left’s insistence that everybody and everything adhere to their agenda and politics is now coming home to roost.” Meckler added, When an overwhelming majority of Americans from all political backgrounds say they are now likely to boycott companies they disagree with, it’s an indicator that regardless of what side they choose to take, this is a losing battle for the companies.”

Taking a cue from nationalist Indians

And this is exactly where the Americans can take a cue from nationalist Indians. Within India too, we have had several instances of companies advocating a left-liberal agenda. But India knows how to ensure that those businesses fall in line.

And why just the left-liberal agenda? India has banned dozens of Chinese apps over the past year and a half or so, in a bid to hit back at Beijing.

Similarly, the people of India went after Hyundai Motors after the company’s Pakistani handle made objectionable remarks about India’s Union Territory of Jammu & Kashmir. Indians drew a clear line- we like your products but we don’t like it enough to let you push the pro-Pakistan agenda on Kashmir.

And guess what, in every single such case, the affected company either apologized or issued a clarification for the users. As an average American, if you feel troubled by the rampant politicization of a corporate, you just need to look at India and find a way of scaring the concerned business into compliance.