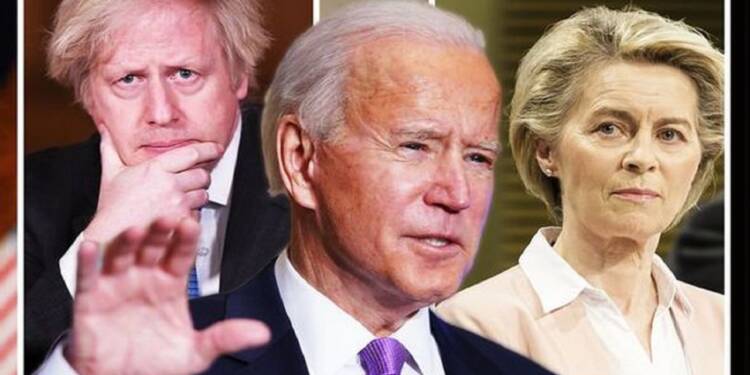 When it comes to sanctioning Russia and supporting Ukraine, the UK has always found itself in bed with the likes of the European Union and the United States. But it seems that rosy days of the amicable ties between the UK and its western friends are already over! Politico has reported that the UK could soon be ‘friend zoned’ by Biden and European leaders. In the worst-case scenario, the UK could also face crippling economic sanctions from the EU and US.

Why US and EU are fuming at UK?

The source of the tensions between UK and US is none other than Brexit. We already know how EU and UK are fighting over the issue of revising the Northern Island Protocol of Brexit. UK is adamant about unilaterally scrapping some provisions of Brexit, which EU vehemently opposes. EU says if the provisions of Brexit concerning Northern Ireland are changed, it would be considered a violation of international laws. And now, US has jumped on the bandwagon to corner UK over the matter.

US threatens to bury FTA talks

US has threatened that it could freeze the ongoing Free Trade Agreement (FTA) talks with UK if a unilateral change is made to the Northern Island protocol. US House Speaker Nancy Pelosi, a leading radical Democrat, recently said that Congress “cannot and will not support a bilateral free trade agreement” with the U.K. if it undermines the arrangement. She also said that upholding Brexit trade provisions were key to maintaining peace and stability in the region.

And now Biden administration is also looking keen to put Pelosi’s words into action. Some even argue that Washington could go way harder than just cutting off the current trade dialogues. Garrett Workman, a senior director of European affairs at the U.S.-U.K. Business Council said “Just cutting off these nascent trade dialogues doesn’t really seem to move the needle. So, there might be pressure to do more than that.

Experts have noted that if UK refuses to budge in the showdown against EU, it will have to face consequences. The trade ties between UK and US have experienced a thaw over the past months, but chances of getting an FTA materialized are running slim. UK’s economy is in shambles and the country hopes that an FTA with the world’s largest economy will help it heal its wounds. UK’s economy shrank 0.1% in March, and the cost of living has drastically gone up.

UK already enmeshed in a diplomatic spat with the EU

And this comes as UK is already entangled in a fierce diplomatic clash with the EU. The EU last week warned that trade restrictions on the UK could be imposed in retaliation if the protocol is scrapped unilaterally. He also warned that ‘the Protocol, as a cornerstone of the Withdrawal Agreement, is an international agreement. Its renegotiation is not an option. The European Union is united in this position.’

Read More: EU’s new trade sanctions are really powerful! But these will be imposed on UK and not Russia

It’s clear that Biden seems to favour EU over UK in this sprawling dispute. Biden doesn’t want to upset Brussels at a time when the Russia-Ukraine war has already fanned anti-US sentiments across Europe. Europe is increasingly stressing the need to achieve self-reliance on the issues related to foreign policy and security. So, by blowing the trumpet in EU’s favour, US wants to keep its hold over Europe intact and undamaged. And that’s why it’s even ready to sacrifice UK to fulfil its geopolitical ambitions.