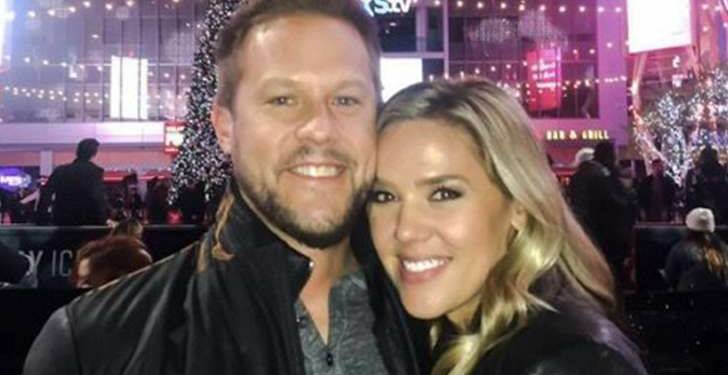 Jaime Maggio has ten years of expertise as a sports broadcaster on television. She is a two-time Emmy Award winner. Maggio can be found on the sidelines with the Clippers for Fox Sports West, as well as anchoring in the CBS Los Angeles studio (CBS-2 and KCAL-9). In this article we are going to talk about the biography, career, notable works, and family of Jaime Maggio so read the article till the end.

She can also be seen stepping in on FS1 national shows Undisputed with Skip Bayless and Shannon Sharpe, and The Herd with Colin Cowherd, or covering the sidelines for the NBA Playoffs on TNT. Maggio has worked for NFL Network, NFL on FOX, MLB on TBS, and Spectrum SportsNet, among others.

Jaime Maggio is a Los Angeles-based native New Yorker and die-hard New York Giants supporter. Before joining Turner Sports, she presented a local sports show in Los Angeles. She started working the sidelines for the NBA and MLB playoffs in 2011.

During her coverage of the 2011 NCAA Men’s Basketball Tournament, she became a breakout star. She joined TWC Sportsnet in the fall of 2013 to cover the Los Angeles Lakers.

She is a dedicated yoga practitioner and traveler who believes strongly in the necessity of philanthropy.

Who is her partner?

Pasternak, Maggio’s boyfriend, works for Sony Pictures as a marketing director. He is a well-educated man who graduated from Pacific Palisades Charter School in 1996.

He also holds a communication and media arts degree from the University of Arizona.

During the early stages of his career, Pasternak worked as a coordinator for Victor & Grais Productions. In 2002, he worked as a production assistant for Pytka Productions.

Jaime Maggio obtained a communications degree from UC Santa Barbara after graduating from Mary Star of the Sea High School, propelling her into a career in broadcast journalism.

She gathered experience across the country before returning to Los Angeles in the spring of 2010 as the co-anchor of KCBS Channel 2 and KCAL Channel 9’s “Sports Central.”

Maggio was lauded for her hard work and credibility in a recent Daily Breeze newspaper article.

Maggio had a natural way of quickly persuading her new coworkers about what she was all about.

Maggio received Dean’s Honors from the University of California, Santa Barbara, with a degree in Communications. She was a Pi Beta Phi sorority member.

She is, without a doubt, taken. Jaime is dating David Pasternak, who is a writer. She’s been in a relationship with hottie Pasternak for a long time. Except for their images, Maggio and Pasternak haven’t revealed anything about their relationship. Through her Instagram posts, Maggio continues to dazzle her fans with stunning photographs of herself and her partner Pasternak.

Maggio began working as an advertising salesman for Forbes Magazine almost immediately after graduation. She was only in charge for a little more than a year.

She then worked as a host for the weekly Sixers Season Pass show for firms like GoTV Network and Comcast Sportsnet. She received a Mid-Atlantic Emmy for her side coverage of the Philadelphia 76ers while at Comcast.

Her career has gone from strength to strength since then. She worked as an on-air correspondent for Fox Interactive Media for three years, from December 2006 to September 2010.

She began working for Turner Sports in 2011 and was known for her coverage of the NBA, MLB, and NCAA tournaments.

She splits her time between the NFL’s NFL Network Now and NFL Fantasy Live, as well as Spectrum Sports Net and other Juggernaut networks.

We hope this biography article of Jaime Maggio will be helpful for you to understand her journey and works.

Collection of Waste Life Quotes and Caption for Instagram