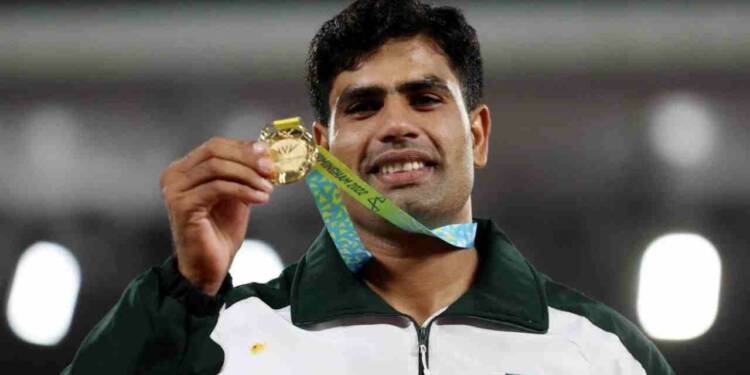 Arshad Nadeem, a Pakistani javelin thrower, was born on January 2, 1997. In the domestic tournament, he stands in for WAPDA. He is the first Pakistani to earn a spot in the Olympic Games and the World Athletics Championships final in any track and field competition. In this article we are going to talk about the biography, career, notable works, games and family of Arshad Nadeem so read the article till the end.

Arshad Nadeem is a Pakistani javelin thrower and he played so many games for his country, this biography article is incomplete without talking about his career. So here you will gain info about his achievements and life story.

In 2015, he began taking part in javelin throw competitions. He was qualified to train at the IAAF High-Performance Training Centre in Mauritius in 2016 thanks to a scholarship he obtained from World Athletics.

At the Islamic Solidarity Games in Baku in May 2017, Nadeem won a bronze medal with a best throw of 76.33 meters. At the Commonwealth Games in Gold Coast, Australia, in April 2018, he qualified for the javelin throw event and recorded a new personal best distance of 80.45 meters.

He also suffered a back problem after the 2018 Commonwealth Games were over. At the Asian Games in Jakarta, Indonesia, in August 2018, he took home a bronze medal after setting a new 80.75-meter personal best and national record.

Arshad Nadeem was born in Mian Channu, Khanewal, Punjab, into a Punjabi family. He is one of eight children, the third oldest. His dad is a stonemason. From his earliest years of school, Arshad was an incredibly adaptable athlete.

He participated in all of the school’s activities, including football, athletics, badminton, and cricket, but his favourite was cricket, and he quickly started competing in tape-ball events at the district level.

Rasheed Ahmad Saqi noticed Arshad when he was in seventh grade and they were competing in sports. Since Saqi had a reputation for mentoring athletes in the division, he quickly took Arshad under his wing.

He competed for Pakistan in his first Olympics appearance at the 2020 Summer Games. He did this to become the first track & field athlete from Pakistan to ever qualify for the Olympics. Before competing in the Olympics, his father said that Arshad was not even given a suitable training facility. Arshad trained in the courtyards and alleys of his own home and is not thought to have gotten any financial aid from the Pakistani government after being selected to compete in the Tokyo Olympics.

He qualified for the men’s javelin throw event final in the 2020 Tokyo Olympics on August 4, 2021. He made Olympic track and field history by being the first-ever Pakistani to reach the final.

He won a gold medal for Pakistan at the 2022 Commonwealth Games on August 7, 2022. Despite being hurt, he broke the competition record with a throw of 90.18 meters on his fifth attempt, besting World Champions Anderson Peters’ effort of 88.64 meters. He was also the first South Asian to reach the 90-meter mark. Since 1962, Pakistan had not won a gold medal in athletics at the Commonwealth Games.

He earned another gold medal for Pakistan at the 2021 Islamic Solidarity Games five days later, on August 12, 2022. He set a new game record with his 88.55-meter throw.

Who won a gold medal for Pakistan in Commonwealth Games 2022?

Arshad Nadeem of Pakistan won the gold medal at the Birmingham 2022 Commonwealth Games on Sunday, becoming the first javelin thrower from the subcontinent to reach the 90-meter mark.

There is no available data to verify whether he is married or not. His social media accounts are also silent about his relationship.

We hope this biography article of Arshad Nadeem will be helpful for you to understand his journey and works.

‘In the new scramble for Africa’, Lavrov beats Blinken by a mile