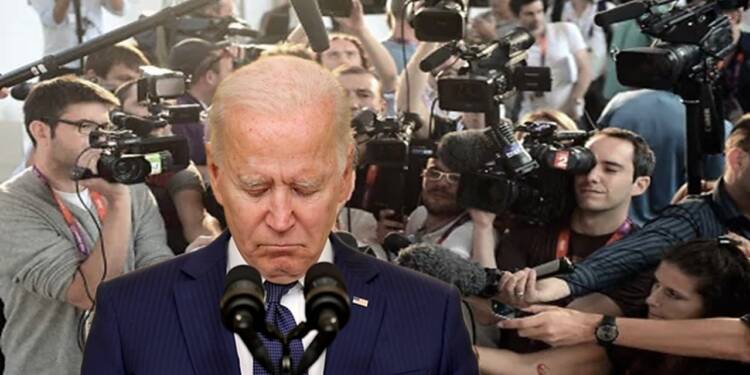 The American economy is in tatters. Inflation is at a 40-year high, petrol costs are skyrocketing, and the US Dollar’s global reputation is deteriorating. Despite the economists’ predicting 1% growth, the US economy shrank by 1.4 percent in the first quarter of 2022. Amidst this, the Biden administration is irresponsibly providing help to Ukraine in the face of a Russian invasion. The US has given Ukraine roughly $60 billion in “aid” since the end of February. That’s over half of the country’s entire GDP in 2020!

The liberal media, that acted as cheerleaders for Biden’s policies, have now finally started to ask some tough questions. The Editorial Board of the New York Times issued an editorial last week headed “What is America’s Strategy in Ukraine?” arguing that the Biden Administration is yet to respond to any queries from the American people about its role in Ukraine. This is the same liberal media that cheered on the war and backed Biden’s stance during the Russia-Ukraine crisis.

Liberal media is frustrated with unintelligible moves of Biden

But why has the liberal media suddenly started to question strategy of Biden in the Ukraine war? Well, there could be two reasons for this.

1. The US economy is in all shambles and yet the Biden administration is recklessly providing the military and financial aid to Ukraine. As mentioned earlier, the price of almost all commodities is skyrocketing. Biden has failed to notice the cry of the common Americans over these rising prices.

All of this suggests that the worst is yet to come. The majority of the difficulties that the United States is facing will only become worse, which is why Americans including the media, are becoming more pessimistic about the economy with each passing day.

Moreover, in one of our recent pieces, we covered how the Biden administration has been recklessly supplying weapons to Ukraine despite the fact its stockpile of these important weapons is low. For this, now even liberal media has started raising questions about the Biden’s unwise moves amid the war.

Read more: the US has exported so many anti-tank missiles to Ukraine that its stockpile is alarmingly low

2. Since the beginning of the war, the Biden administration has maintained that protecting Ukraine’s borders is vital to our national interests and is worth risking nuclear war for. However, the administration’s proclaimed goal of safeguarding Ukraine’s democracy has taken a slight turn. Not long ago, Defense Secretary Austin laid out the Administration’s new strategy, saying that the real purpose is to weaken Russia.

All of this has irked the liberal media, which was earlier supporting Biden unconditionally. The media says that there are many unanswered questions by the Biden whose answers every American seeks to know and has the right to know.

In the article published by the New York Times’ Editorial Board, they wrote:

…it is still not in America’s best interest to plunge into an all-out war with Russia, even if a negotiated peace may require Ukraine to make some hard decisions. And the US aims and strategy in this war have become harder to discern, as the parameters of the mission appear to have changed.

Furthermore, Biden has found a method to avoid these difficult issues. According to data from Towson University’s White House Transition Project, President Biden has gone over 100 days without doing any mainstream media interviews. From January 20, 2021, to April 29, 2022, he only did 23 press interviews, compared to Donald Trump’s 95 and Barack Obama’s 187 at the same point in their presidencies. This certainly demonstrates that Biden is well aware of his failing domestic and foreign policies. To avoid any questions, he has simply discovered a method of erecting a wall between himself and the media.