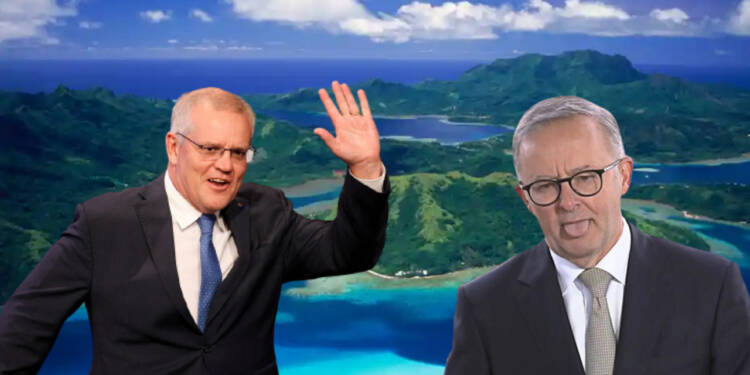 It seems like Chinese foreign minister Wang Yi was waiting all this time for Scott Morrison to leave the Lodge in Canberra. Right after the latter got ousted following a popular mandate that saw Anthony Albanese assuming office as the 31st prime minister of Australia, Chinese FM Wang Yi creeped into the South-Pacific region starting an official visit to ramp ties with tiny but strategically located island nations.

“The reason why China’s presence has been welcomed by the regional countries is that China could promote the livelihood of the locals and activate the economic potentials of those islands, experts said. However, some Western media have focused only on the cooperation about security, and tried to exaggerate that the cooperation could spark a new Cold War between China and the West in the region,” Chinese state media said in a report.

China is thus arriving at the beginning of a deal that will see 10 pacific nations endorsing an agreement covering everything from security to fisheries which teases the chance of Beijing gaining complete control of the region. Albeit this, China’s plans simply don’t end with security pacts. Beijing’s lucrative catch further goes into increasing cooperation on running the region’s internet connections to developing a special marine plan for fisheries in this region, especially for the prized tuna fish.

With the Solomon Island issue still rousing concern within many quarters of international space, US Department of State spokesperson Ned Price took the issue and opined “We are concerned that these reported agreements may be negotiated in a rushed, nontransparent process,” Price told reporters. He warned that China “has a pattern of offering shadowy, vague deals with little transparency or regional consultation in areas related to fishing, related to resource management, development, development assistance and more recently even security practices.”

Read more: Quad started with four legendary China hawks, only one of them remains now

More light should be directed into the draft agreement that calls for compliance from the pacific nations on the infamous one-China policy on Taiwan. This also puts forward the ‘non-interference’ policy that China abides by that may amputate any such interference from foreign nations into China’s human rights issue.

Whatever be the policy, much appreciation should be showered on the cleverly combined timing of the Chinese FM’s visit to these pacific nations. It turns out that Beijing spirited away with confidence in abundance to meet its demands with the pacific nations only for the fact that there was no Scott Morrison anymore.

Morrison earned a name for being a strongman with his quite episodical belligerence with China. Beijing thus had a tough time trying to truce with the former prime minister who was hell-bent on scrapping every possible deal with the Chinese on Australian soil. The severed trade deals and other downfalls during the Morrison era tells a story in itself.

Nevertheless, with the ascension of Albanese in his place, Beijing is left with a free hand to experiment and there is no point in straying time off from the pacific heartland. Wang Yi’s visit is thus a wake-up call for the world. Albanese may produce a handful of China baiting statements as he did a few days back, but his submission to Beijing isn’t a new story.