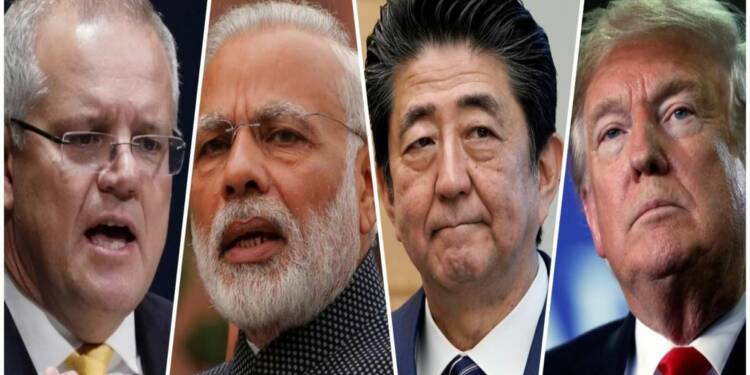 In 2018, the world shifted its focus towards the Indo-pacific. A big revival of the sort was undergoing in this region.

Four Countries ignited a move that served as a signal that China’s do15 years ago, it was under the aegis of the then-Japan prime minister Shinzo Abe that an American, Indian, and Australian walked into a room in Manila.  The four countries couched side by side in the meeting to take note of a catastrophe that has been foreshadowing in the Indo-pacific region. Yes, China.

The exchange of strategies and occasional summits became common between the four nations known as the Quadrilateral. Apart from the big talks of pushback against Beijing, nothing productive happened as the four nations failed to inflict any kind of worries on China’s free run in the Indo-pacific. The Quad turned out to be a joke as many judged them gone.

Even in the grave, all is not lost. The famous quote had many meanings relating to the happenings in the year 2018. The countries in the quadrilateral went through a political turnaround with new four leaders emerging that finally shaped the caution sign for China.

An inimitable Donald trump, an incorrigible Narendra Modi, a prudent Shinzo Abe, and the strongman in Scott Morrison. Once again, the quadrilateral started cranking with intention of doing big things. True to the word it was not just mere talk this time, Quad in all sense turned out to be a thorn for China with India conducting multilateral wargaming known as a Malabar exercise on China’s turf.

Scott Morrison in his part was extremely effective in slaying the dragon. China controlled the portable water, electricity, and whatnot in Australia. Under the garb of BRI, China even got the southern state of Victoria under its control. China had its spies everywhere and Australia was on its way to becoming a Chinese client state before Scott Morrison happened.

Morrison went hell-bent on bruising China by all means. He teamed up with like-minded countries including India and got the BRI project in Victoria scrapped. Trade deals between the two countries touched the nadir, with the rampant arrest of Australian journalists and citizens in mainland China. The situation triggered geopolitical anxieties but Morrison remained at his nonchalant best.

India remains the only country that has exchanged blows with China. The bruises from the Pangong Tso saga are yet to heal for Beijing. The images of Chinese soldiers crying their heart out inside a bus is a testament to the whole episode.

Going far, Narendra Modi mustered the nerve to wish his holiness Dalai lama. No other world leaders had ever wished the holy saint before, not even Donald Trump. Modi further went in his rampage run to erase any trace of China from Indian markets by banning an array of Chinese software and technologies that once used to rule the Indian market.

But with the broader form of politics taking shape in recent times, India remains the only country that has not seen a change of guard in the Quad. The USA is having a president in joe Biden who took the podium of Quad to deliver his two-cent advice on climate change and greenery. Japan is passing through a disaster with Fumio Kishida at the helm of affairs. Kishida neglecting Shinzo Abe’s diplomacy has put its head into the Ukraine war and has been trying to find an escape route since.

The people of Japan are industrious but when it comes to political stability, they can put Sri Lanka to shame. 10 prime ministers in 10 years. That’s Japan for you.

Anthony Albanese is the new Australian prime minister. He is an ardent follower of the Chinese communist party. Albanese’s prime strategy would be to dilute Quad and for that to happen without any hindrance, we may see him giving 10 to 20 Anti-China statements, if not more. It is a ploy to bring the USA under Australia’s orbit for fruitful mercantile deeds.

With such a political scenario looming over the Indo-pacific, earthly salvation is not in the picture, and in the coming days the efficacy of the Quad remains doubtful by large.