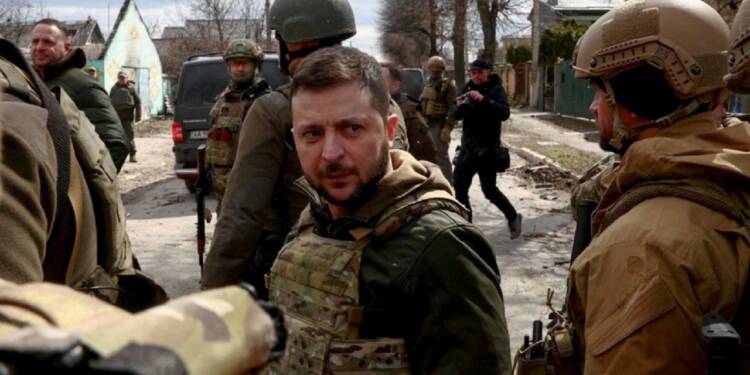 Ukraine's President Volodymyr Zelenskiy looks on as he is surrounded by Ukrainian servicemen as Russia's invasion of Ukraine continues, in Bucha, outside Kyiv, Ukraine, April 4, 2022. REUTERS/Marko Djurica TPX IMAGES OF THE DAY

“Our men are refusing to fight”

“Our superiors have left us to die”

These screams belong to the Ukrainian commanders. They have been braving Russian assault for 93 days. At the height of the nationalism wave that swept through Ukraine in the beginning of the war, many of them decided to lift arms to defend their nation. Zelensky promised them that their all needs will be taken care of! Kyiv had also promised Ukrainian military training and modern equipment to them!

The resolve to fight out the Russian invaders was strong! On Ukrainian TV and social media, Ukraine had already started to win the war. More than amused Ukrainian fighters would flock to the borders to witness the façade of Russian military might. But soon they realized what patiently waited for them in the woods and on the battlefield was all but death and miseries.

Serhi Lapko, a Ukrainian military commander, fighting on the frontline said, “We are praying to stay alive.” The fearful commander further said, “They [Russians] already know where we are, and when the Ukrainian tank shoots from our side it gives away our position. And they start firing back with everything — Grads, mortars.”

Lapko then gives a detailed account of how their superiors have left them in the lurch. He said, “Our command takes no responsibility. They only take credit for our achievements. They give us no support.” Now, he, along with his company, has decided to retreat, and he fears that they could face a court-martial and time in military prison.

‘Death is waiting for us’

Serhiy Haidai, head of the regional war administration in Luhansk province, acknowledged that many of the volunteers who came to fight did not receive proper military training. Washington Post quoted him as saying, “They have enough medical supplies and food. The only thing is there are people that aren’t ready to fight.” In a video uploaded to Telegram on May 24, many Ukrainian volunteers confirmed that they are no longer willing to fight because they don’t have military equipment, rear support, and strong leadership.

“We are being sent to certain death,” said a volunteer. He added, “We are not alone like this, we are many.” Serhi Lapko also told that his so-called military training only lasted for less than a half-hour. He said, “We shot 30 bullets and then they said, ‘You can’t get more; too expensive.’”

‘Misguided and left in the lurch’

He further added, “When we were coming here, we were told that we were going to be in the third line on defence. Instead, we came to the zero line, the front line. We didn’t know where we were going.” He said that he had not been provided with a radio, which prevents him from calling for help in case of any emergency. What he further said was truly shocking and exposed Zelensky’s brutal regime in its entirety.

He said that Kyiv was deliberately not acknowledging the death of Ukrainian soldiers at the frontline, “to protect morale among troops and the general public.” He told, “On Ukrainian TV we see that there are no losses. There’s no truth.” Lastly, he said, “I think we were sent here to close a gap and no one cares if we live or die.”

Consequences will be dire

Make no mistake, that’s not the story of Lapko alone; thousands of civilian volunteers and soldiers who have been battling with the second-most powerful military on the planet feel the exact same way. They feel cheated and livid at Kyiv. They know Ukraine is losing, but Zelensky’s appetite for blood knows no boundaries! The regime in Kyiv is adamant about prolonging the war till the year-end, but the response from the men in uniform indicates that this strategy could very well backfire on his depleted regime.

Kyiv is imprisoning soldiers who are denying to fight! So, they might prefer to surrender before the Russian army. Prior to launching the invasion, Putin had called on the Ukrainian military to join hands with Russia. Now, that could become a reality. Moreover, the Ukrainian army, seeing no options left on the table, could also be forced by Russia to stage a military coup in Kyiv. This way, Russia will get to control Kyiv without the need of performing a political manoeuvre. In the worst-case scenario, frustrated and anguished Ukrainian soldiers could also orchestrate a mutiny against Kyiv over the indifference conferred upon them by the Zelensky administration.

All in all, the tides have begun turning in Ukraine. The mood is changing, and the Ukrainian military is close to laying down its weapons before the Russians. For them, not Putin, but Zelensky is their real villain.