‘Expose school girls in washrooms to boys if you want funds,’ 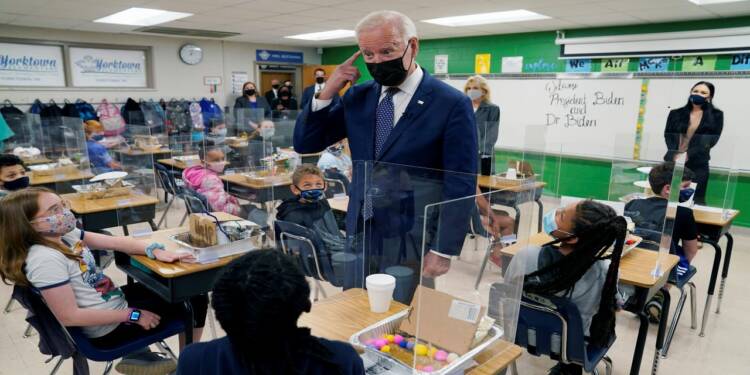 In order to promote gender equity and neutrality, Biden has been very enthusiastic since he took the presidential chair. His administration passed an order to establish the White House Gender Policy Council. This council is aimed at advancing gender equity and equality as a matter of human rights, justice, and fairness.

But with the new move, Biden seems to have moved too little far. In a shocking step, Biden and his administration in order to promote gender neutrality have come up with a shocking step. As per the new ruling, all federally funded schools must allow boys into girls’ private areas.

President Joe Biden’s transgender agenda has now been publicly endorsed by the US Department of Agriculture, which is taking steps to ensure that schools adhere. The Biden administration is reportedly planning to withhold food funds intended for needy children if schools do not implement transgender restroom regulations.

The Biden administration declared last month that K-12 schools must allow boys inside girls’ private rooms in order to receive federal subsidies for meals, breakfasts, and snacks. The Biden administration’s news statements from numerous agencies outlining this policy would be followed by formal rulemaking in June, according to a representative for the US Department of Education.

Establishments that accept any federal food support, including food stamps, must also allow males who claim to be female access to female private spaces including showers, restrooms, and sleeping places, according to the new requirement. Such businesses must also adhere to policies such as mandating employees to use inaccurate pronouns when referring to transgender people and enabling male employees to dress as women while at the work.

Despite the fact that President Biden’s Executive Order on Preventing and Combating Discrimination on the Basis of Gender Identity or Sexual Orientation is in conformity with the Supreme Court’s ruling in Bostock v. Clayton County, which outlaws discrimination along those lines. However, cutting financing for these institutions, which feed many disadvantaged children, does not justify Biden’s action. Stopping the financing for these children’s food cannot be considered to promote gender equity and neutrality.

Nonetheless, according to the USDA, the National School Lunch Program served low-cost or free lunches to 29.6 million children on average each school day in nearly 100,000 public and nonprofit private schools (grades PK-12) and residential child care institutions in 2019, at a total cost of $14.2 billion. The next year, 76.9% of all NSLP meals were given out for free or at a reduced cost.

“It seems to be playing politics with feeding poor kids, which is really unfortunate,” John Elcesser, executive director of the Indiana Non-Public Education Association, said in a phone interview with The Federalist. “Because if a school feels like they cannot participate because it’s in conflict with their mission or values if a religious exemption is not granted, you’re taking away a program that’s feeding low-income kids.”

This action not only jeopardizes the nutrition of these children but also puts girls’ safety in jeopardy. Many incidents have been reported in which a transgender teen assaulted a teen female in a women’s toilet. While this new law tries to promote gender neutrality, it inevitably jeopardizes the food security of the poor. Biden should reconsider his decision and think about it from the standpoint of a human being.