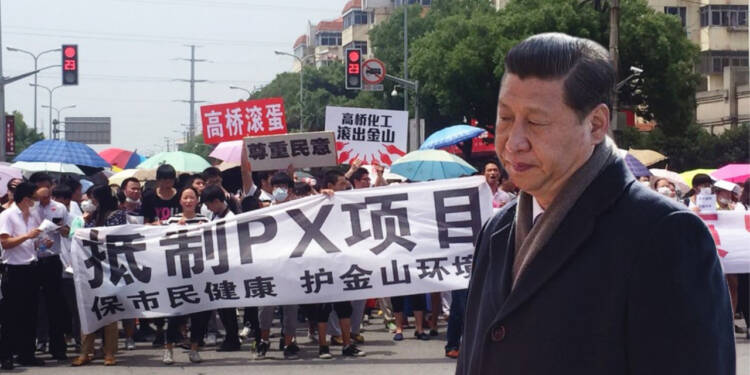 How chaos ensued in the megalopolis of Shanghai after the brutal lockdown imposed on March had its share of good runs across the media portals. Even though China played the shanghai episode as a canard, the videos that emerged showed a different picture with scenes of desperation and scarcity of food among many. Even the frustrated citizens went ahead with banging pans and pots in protest against the CCP regime, quite an embarrassment considering China’s standards of stifling down every voice of protest.

But after two months of high-handedness by the authorities, Shanghai, the country’s economic hub and global trade center has curbed down the covid lockdowns in full. “This is a day that we dreamed of for a very long time,” Shanghai government spokeswoman Yin Xin told reporters. But new rules have been introduced, with residents required to show a green health code on their smartphone to leave their residential compounds and enter most places.

As the authorities try to charm the residents with the lifting of the lockdown, a new call for protest has made its way through the city to protest against the policies of Chinese leader Xi Jinping. The sudden superflux of protest caught the Chinese authorities off-guard with the common lyric of the protest going against the strict imposition of the Zero covid policy.

On an interesting note, the current wave of protest was pushed by no ordinary citizens, but by businesses that were once reaping gold in the megalopolis. The May letter, penned by businesses rather than shop-floor workers, predicts mass capital flight and a widespread loss of public confidence in the ruling Chinese Communist Party (CCP) under Xi, and calls on the industrial sector not to act like “sheep fattened for slaughter.”

“It is a pity that some of us entrepreneurs and investors who are slightly successful, despite sitting on investments of hundreds of billions of yuan in Shanghai and across the whole country, and employing millions of employees, are still struggling,” the letter said

“Now we have woken up, we are no longer willing to wait like fat lambs for the slaughter,” it said. “In honor of the 20th CCP National Congress [later this year], we will be going back to work, but not back to production.”

Once unimaginable, China is now turning out to be a bastion of uprising and protest against the ruling communist regime. The heyday that the CCP enjoyed with gruesome control over media and its masses is showing early signs of fading away. The Shanghai lockdown in March has sparked controversy to such an extent that made the sprawling business houses in the city come to a sudden halt. Albeit mired in the blunder of the Covid policy and the quickening voice of protest from different quarters within China, Xi Jinping stayed committed to his policy of placing onerous restrictions on its citizens.

Moreover, the longstanding authoritarianism and the current sense of tensions inside the CCP circle happened to be fodder for the protesting businesses which digressed further into politics to comment on opinions that were far ahead of their purview.

“Returning power to the people, rewriting the constitution, loosening the CCP’s control of the media, eliminating the privileged class, abolishing feudal systems like household registration and political review, and all other unreasonable systems that violate human morality and conscience,” the letter said.

Derailing from expectation it seems the 20th congress of the communist party may not give the firing shots aimed at Xi Jinping. With a spate of policies, the economy is also showing no signs of revival. The entrepreneurs have a pretty good picture of what is in store for China and with the multitude of protests sprouting out in China, the business has also jumped the bandwagon to take the CCP to the task. Maybe there will be civil unrest, or maybe not.