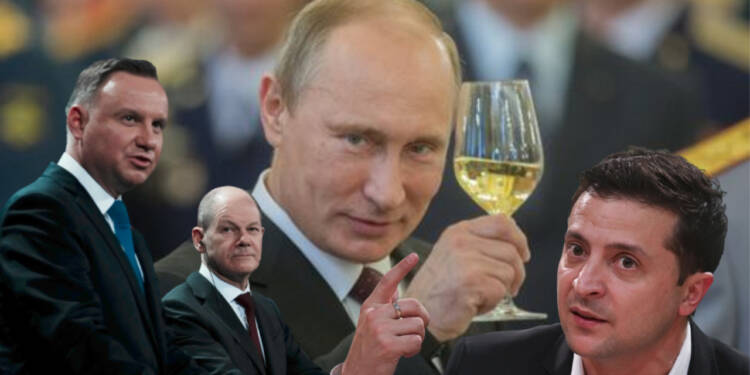 In the middle of the Russia-Ukraine crisis, each country is attempting to extract its own benefits from the conflict. In this context, Poland has assumed a leadership position inside the EU, dictating to other nations what they should do in Ukraine. As a result, Poland has been pleading with other countries to assist Kyiv by providing financial and military aid. Have you ever wondered what the hidden objectives behind Poland’s action might be?

Poland has its own motives

Well, there are three main hidden motives of Poland in Ukraine:

2.      To reconstitute Warsaw’s former commonwealth as what constitutes present Belarus and Ukraine, i.e. the idea of creating an intermarium.

Poland-Germany alliance to win over Ukraine

Anyway, to realize the above motives Poland is now trying to make an alliance with Germany. Deputy Chairman of the Russian Security Council and former President Dmitry Medvedev recently accused Poland of tying up with Prussia( a former german state during the world war era) simply meaning a Poland -German alliance.

In the past, in 1934, Nazi Germany and the Second Polish Republic signed a non-aggression treaty. The Nazi-Polish alliance, on the other hand, was reached without force and solely to further their mutual interests against the Soviet Union. Former Polish strongman Jozef Pilsudski loathed the Soviets and apparently hoped that the Nazis would help him carry out his “Prometheist” strategy, which aimed to destabilise the former Soviet republics.

Ukraine’s de facto confederalization with Poland, which coincides with Germany’s unparalleled post-World War II militarization, fits nicely with their collaborative plans to destabilise the resource-rich former Soviet Republic’s economy by participating in the US-led NATO proxy war on Russia. Germany looks to be planning an invasion of Ukraine, this time in collaboration with Poland rather than Austria-Hungary.

Vienna was Berlin’s junior partner back then, but now it’s Warsaw, as it was envisioned in this scenario in the mid-1930s if the Nazi-Polish Non-Aggression Pact materialised in a joint invasion of the Soviet Union. Medvedev was justified in increasing awareness of what he correctly defined as the Polish-Prussian alliance recently for these interrelated historical and modern geopolitical reasons. Those two are indeed conspiring to bring the Ukrainian economy to a halt through their participation in the country’s proxy war against Russia, in order to plunder its vast resources under the guise of “reconstructing” them.

Nevertheless, this interconnected history between Germany and Poland could take a twist considering the contemporary scenario. Anyways, Ukraine is on the verge of losing the war with the giving away of the strategically important Mariupol on April 21. And there is quite a possibility in order to finish off the war as soon as possible, and for Poland to realise its above-mentioned motives, the Polish-German alliance could help Russia in the war. And as a payback, Russia could give away some parts of the western Ukraine to Poland.