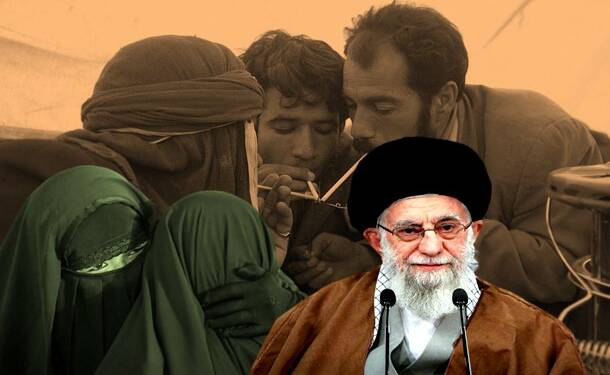 Iran is a smokescreen. Behind the veneer of the immaculately manicured gardens, the prowess of architecture, or the well-carved-out alleys, there is an Iran the world has seldom heard about. Whenever Iran pops up in our mind, the picture inside would not go beyond mullahs and the burqa-laden women folks walking down the streets of Tehran. For Iranians, Islam is not just a religion but a lifestyle that the citizens have attuned to since the Islamic Revolution of the late 1970s.

A new barometer of change

Iran always echoed the moral principles inscribed in their books. But now the Islamic Republic is witnessing a change that is alien to what its core belief suggests. Prostitution and drugs are ratcheting up like anything in the alleys of Tehran. Yes, you are hearing it right—The same Iran where women clad themselves in headscarves, where unmarried couples holding hands can trigger a conflict, and going on dates can only be reserved for dreams.

Read more: As the world watches the Russia-Ukraine war, a Turkey-Iran mini-war has already started

It is to be noted that Prostitution around the world had always been rooted in a single narrative, POVERTY. But when it comes to Iran, it plays a different song. Here it is not poverty that is roping the young ladies into the dungeons of prostitution but it is individual freedom. Yes, the current generation of youths calls for individual freedom and it amazes me to ponder over the fact that a sizeable number of young dames getting into this business hail from reputed universities while many others are still living at the tender age of eighteen. Juxtaposing the current spate of events with the Salman Rushdie fiasco, one may wonder whether it is the same Iran or not.

Although the Iranian conservative regime long distanced itself from admitting the existence of sex workers in the country, the statistics say a different story. Data suggests the number of Iran’s sex workers is witnessing a rapid rise. According to Aaftaab Society, an NGO for social damage control and prevention, there are about 10,000 female sex workers alone in Tehran. Statistics from this NGO further point out that girls as young as 12 were involved in prostitution.

After the revolution in 1979, the Shiite clerics, headed by former Supreme Leader of Iran, Ruhollah Khomeini, executed a number of female sex workers, closed brothels and replaced them with the so-called temporary marriage contracts, claiming that it is the Sunnah of the Prophet.

Polls suggest that 97 per cent of young girls entering the field were based out of urban areas, and this happens in a state that considers any such act as an aberration.

And another interesting tale revolves around Iran’s Zawaj-al-mutaa or “pleasure marriage” system that legitimizes using women for sex.

Appallingly, under Shia Islamic system, a mutaa marriage is allowed and is not considered an act of prostitution. The practise is widespread in the holy cities of Mashhad and Qom, which are visited by Shia pilgrims from all over the world.

These are the reasons why young Iranians are getting more averse to the ideological binding that has shackled them for all these years. There happens to be an aversion to violence and to the hypocritical clerical demands.

There is only one thing that predominates the change in the social culture of the Iranian young minds–their insatiable need to enjoy the perks of upward mobility. The Iranian youth of today is ready to sacrifice anything to have a grip on the so-called riches of the West. The trend has turned out to be a staple among Iranian youths.

The dissidence from the Iranian youth has further paved the way for Tehran to metamorphize into a den for drug smuggling. The rings of vices have now turned the Iranian youth to lay hands on crystal meths that may even envy the kids drenched in drugs in the New York Central Park. With neighbouring Afghanistan having the Taliban in power, the opium trade into the borders of Iran has escalated at a rapid pace. In recent years, reports suggest that there has been increased use of heroin, crystal methamphetamine, and ecstasy. There are numerous reports with facts that drug use is more rampant among high school students than adults. Reports say that the usage is 26.5 % among boys and 11.5% among girls.

The Iranian youth are remoulding their social tradition and it has a lot to do with theological ideas and hate being hammered down into their heads.

The current form of dissidence from the Iranian youth should indeed elicit a stock reaction from the whole world. But the real meat of the issue is how the Islamic theology is at crossroads with the youth and how the repeated charge of western imperialism did nothing to carve out a better youth as what the Ayatollah dreamed of. The theological leanings within youth in Islamic nations are waning away, Iran may be a start.