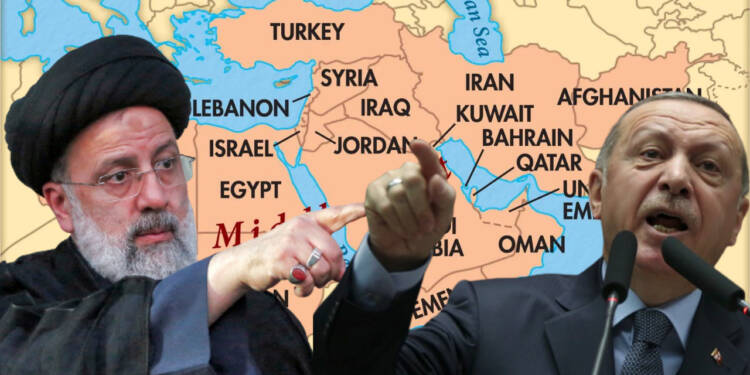 As the world focuses on the war between Russia and Ukraine and its economic, geostrategic and diplomatic ripple effects, a mini-war is brewing at an unprecedented pace between Turkey and Iran. Iraq, Turkey, and Iran have begun supporting the opposite sides. Ankara has been going all-guns-blazing against the Kurds in Iraq and Syria for quite some time. However, Iran is now using its own proxy militias to aid the Kurdistan Workers Party (PKK) in Iraq. Turkey has intensified air, drone, and artillery attacks against Kurdistan Workers Party (PKK) target beyond the remote, northern Qandil mountains of Iraq.

Iran likes to call itself the guardian of Iraq, even though Baghdad has had just about enough of Tehran’s interference. So, by virtue of Iran’s zeal to defend “Iraqi sovereignty”, Tehran has begun fighting a proxy war against Turkey. To be fair, Turkey has extended its operations beyond the remote mountain regions into major population centers. Sinjar, for one, has become a major flashpoint between Turkey, Iraq, and Iran.

Sinjar is one of two major population centers for Iraq’s Yazidi minority. So, Tehran considers protecting such areas a moral responsibility, which is why its militias have begun supporting the Kurds in their fight against Turkey.

Iraq is not where all the action is actually underway when it comes to Iran and Turkey exchanging some severe blows. In fact, Turkey seems to be taking some steps which are really hurting Iran’s interests. For starters, Turkey is reportedly playing with water flow into Iran, causing some severe panic attacks within the Ayatollah’s regime.

Iran has begun publicly admonishing Turkey for its rampant construction of dams on the Aras and Tigris rivers.

Iranian Foreign Minister Hossein Amir-Abdollahian slammed Turkey’s dam projects as “unacceptable” moves that threaten to reduce water flows and inflict environmental damage to both Iran and Iraq. Importantly, Turkey is not a signatory of the 1997 New York Convention on the non-navigational use of trans boundary waters, which prevents Tehran from suing Ankara internationally. Therefore, the Iranian foreign minister said, “We should not allow countries such as Turkey to use the current lack of an international mechanism to change the environmental conditions either in Iran or Iraq.”

According to AL-Monitor, Iranian parliament speaker Mohammad Bagher Ghalibaf said Iran viewed the issue from a national security perspective. Iran has been claiming that the Ilisu Dam built by Turkey on the Tigris, inaugurated last year, poses environmental risks not only to Iraq but also to Iran.

Additionally, Iran has squarely blamed Turkey for dust storms as a result of drought, owing to reduced water flows in the Tigris and Euphrates.

Obviously, Turkey has denied the accusations made by Iran, in a rather aggressive manner. Turkish Foreign Ministry spokesperson Tanju Bilgic said on May 12 that the Iranian claims are “far from scientific,” adding that Africa and the Middle East are the actual origins of dust and sand storms.

AL-Monitor reported Turkish officials as saying that Iran’s water shortages are caused by Tehran’s mismanagement of water resources. They added that Iran’s accusatory tone against Turkey is aimed at quelling the growing water grievances of its populace.

It is true that Iran has no water management, irrigation, or for that matter, even an agricultural policy. The acute water mismanagement has led to massive protests in Iran that have scared the mullah regime to its core. Currently, street protests are simmering in several provinces of Iran owing to President Ebrahim Raisi’s decision to cut state subsidies on food.

Ties between Iran and Turkey are getting strained with each passing day. Turkey is exacerbating Iran’s water woes due to Tehran aiding the Kurds in Iraq. Turkey, meanwhile, is refuting such allegations and perhaps even looking to stoke domestic tensions within Iran. All of this could escalate very quickly into a conflict of sorts between the two countries.