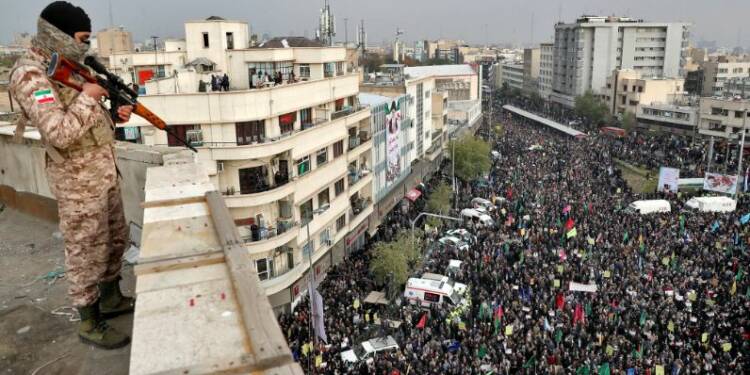 The people of Iran are livid. Let’s give you some context over the situation in Iran. Iran owns the second-largest natural-gas reserves in the world, and sits on the world’s fourth-largest oil reserves. Add to that, the Shi’ite nation has a variety of other assets in the form of mines, forests, hydropower and arable land. The people of Iran are an aspirational one. They usually do not take the status quo lying down – and the people of Iran have risen now. A country so gifted in terms of natural resources is not being able to supply its citizens water and electricity – so Iranians have decided to fight for these basic necessities.

In the Sunni-dominated province of Khuzestan, Iranians are out on the streets. For a week now, people of Khuzestan province have been protesting the regime’s shameless apathy towards them. Officially, Iran’s theocratic regime has admitted the deaths of three protesting civilians, and blamed “terrorist” and “separatist” groups for their demise. However, videos on social media suggest that Iran’s security forces are shooting protestors at point-blank range. Many are feared dead, but the Iranian regime is not in a mood to admit their crimes against humanity anytime soon.

Anti-regime demonstrations are still underway in Iran's #Khuzestan province. This video is from #Susangerd where security forces are seen shooting at innocent protesters asking for water.

Khuzestan doesn't have water and the regime is to blame for wrong water policies. pic.twitter.com/QNugWzPZB2

Iranian regime security forces opening fire (July 17) at point-blank range targeting locals in Shawar in #Khuzestan protesting severe water shortages due to regime's mismanagement & corrupt policies. Three youth have been killed by IRGC during #IranProtests in the past 3 days. pic.twitter.com/qqWswVF7kX

Evidence of Iranian regime dispatching a large number of its suppressive forces to Khuzestan to quell protests on the 4th day (July 18) over severe water shortages across the oil-rich #Khuzestan province. #IranProtests pic.twitter.com/hXc0HYvRH2

During the scorching summer, the bare minimum the citizen of any country want is uninterrupted water and electricity supply. In Iran, citizens do not get to make such demands. So, for over a week now, the people of Khuzestan have been on the streets – demanding their rights. Protests have been held in a number of cities across the southwestern province, including in Ahvaz, Ramhormoz, and Susangerd. Parts of Iran have experienced weeks of electricity blackouts this year.

Iran is also faced with the worst drought in 50 years. Although droughts are natural, poor water management all over Iran has exacerbated the crisis – leaving citizens thirsty and scorched. It was only a matter of time before the people of Khuzestan rose against the Iranian regime. According to the Iranian Department of Water and Sewerage, at least 110 Iranian cities have been struggling with regular water cuts during the summer of 2021 – temperatures during which have gone up to 50 degrees Celsius. Iran ranks fourth in the world in terms of water scarcity. Besides, Khuzestan is home to an ethnic Arab minority that complains of discrimination and lack of services in the impoverished region near the border with Iraq.

Since these protestors are predominantly Sunni Arabs, Iran is not blinking even slightly before shooting them dead. The province also saw some of the largest crowds during the 2019 nationwide protests that formed over the abrupt tripling of petrol prices. Human rights organisations say hundreds were killed during those protests as internet access was almost completely cut off across the country for nearly a week.

Water and electricity are definitely the main issues plaguing Iran – but the Shi’ite nation’s people know for a fact that most of their country’s woes have been self-inflicted by the theocratic regime – whose entire energies are focussed towards fighting Sunnis in the Arab world and Jews. Apart from waging ideological battles against the Arabs, Iran has also occupied itself with the unending thirst of developing nuclear weapons, for which it faces harsh economic sanctions from the West.

Nationally, the progress of the Covid-19 inoculation programme has been a failure, and while much of the world races back towards normalcy, only 2.6 per cent of a population of 85 million have been fully vaccinated in Iran. So, Iranians are rushing to neighbouring Armenia to get vaccinated against Covid-19. In what should put Iran to shame, Armenia is providing free vaccines to not just its own citizens, but also those coming from Iran.

Iran is beginning to implode. With Iranians rising up in arms against the regime for its visible ineptitude and disregard for domestic issues, Ebrahim Raisi is set to take office in tumultuous times – and if he tests the patience of Iranians for far too long, he might just be kicked out of office rather vividly.