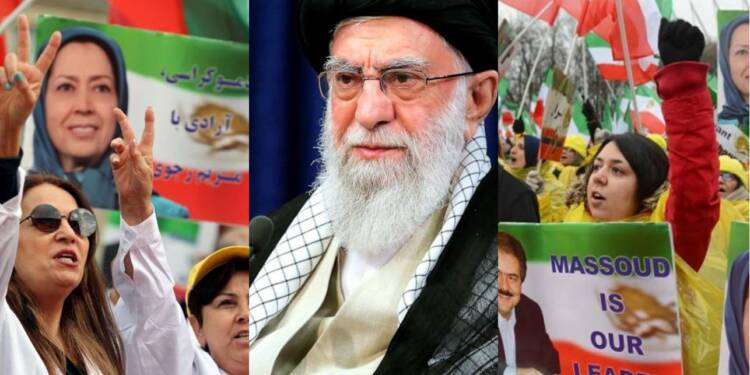 Iran is fast turning into a country where the very semblance of freedom is evaporating. After the election of Ebrahim Raisi as President, Iran’s fortunes have taken a turn for the worse. The only significant opposition to the Iranian government and radical Islamist regime is now no longer within Iranian territories. Instead, it is based out of foreign countries like France and Albania. The National Council of Resistance of Iran (NCRI) is the only hope which the Shi’ite nation has to be free from the Islamic clergy and regime one day. And this opposition group is beginning to garner the support of some of the biggest leaders of the West.

Within Iran, the NCRI is deemed a terrorist organisation. This was the case with the European Union and the United States as well, who had labelled the NCRI as a terror organisation up until 2009 and 2012 respectively. Now, the NCRI is being supported, applauded, and appreciated by some of the biggest names in the West – solely due to the fact that it is the only organisation of Iranians that can truly challenge the Islamist regime in Tehran.

The NCRI is the political wing of the Mujahedeen-e-Khalq. On Saturday, the NCRI organised protests in Berlin and elsewhere seeking the prosecution of the Islamic Republic’s newly elected president, Ebrahim Raisi, who is accused of crimes against humanity. These international protests coincided with general strikes in Iran, led by contract workers in the oil and petrochemical industries, which were also joined by workers from more than 100 state-owned companies.

Founded in 1981, the NCRI’s primary objective is to replace the Islamic regime in control of the affairs in Iran. The coalition is made up of different Iranian dissident groups, with its main member being the People’s Mujahedin of Iran (MEK). The NCRI also aims to establish a pluralistic political system with free assembly, freedom of expression and respect for individual freedoms in Iran. It seeks a separation of mosque and state, and also advocates for prohibitions against religious discrimination.

Interestingly, it supports an outright rejection of nuclear development and possession of weapons of mass destruction. For its democratic ethos and its fight against the Islamist regime in Tehran, the NCRI is garnering global support at an unprecedented pace – which is rattling the clergy and extremists in power in Tehran.

On Saturday, the NCRI organised a massive rally in front of Berlin’s iconic Brandenburg Gate. For this event, the NCRI was able to get many famous and influential speakers, some of which included former U.S. Secretary of State Mike Pompeo, Democratic strategist Donna Brazile and numerous serving U.S. senators from across the aisle. They all commended the NCRI for its efforts at fighting the Iranian regime which has lost its mind.

Applauding the NCRI, Pompeo said, “May your mission be blessed and protected, may the Iranian people be blessed.” Pompeo’s support for the group was echoed by Donna Brazile, who praised the “remarkable courage and leadership” of the NRCI’s president, Maryam Rajavi. Also speaking during the event were Democratic Sens. Bob Menendez and Cory Booker, and Republican Sens. Roy Blunt and Ted Cruz, the former U.K. House of Commons Speaker John Bercow, former Italian Foreign Minister Franco Frattini, former Canadian Prime Minister Stephen Harper and others.

The NCRI is not all that is worrying Tehran right now. In fact, exiled Prince Reza Pahlavi, who is the son of the last Shah of Iran is also mounting an aggressive campaign against the Islamists in power in his country. Reza Pahlavi, the heir to Iran’s last Shah, has declared civil disobedience against the Islamic Republic. He advocates for the abolition of the clerical state and a popular referendum on Iran’s future political structure. In a statement released on Saturday, Pahlavi called on Iranians to aspire to be citizens, not “Khamenei’s slaves and vassals,” and praised the continued strikes and rallies as proof of “unprecedented national cooperation in civil disobedience.”

Meanwhile, the former Supreme Leader – Ayatollah Ruhollah Khomeini’s family is rising in revolt as well. Hassan Khomeini – grandson of Ayatollah Rohullah called out the Iranian Guardian Council’s brazen engineering of the polls, saying the new government which will be formed will not have the backing of the public, and will thus be an ‘illegitimate’ one.

With the backing of the Western powers, the NCRI can work with other opposition leaders and forces and seek to replace the Islamist regime of Tehran with one which is secular and democracy-loving. Already, the European Union has announced renewed support for those most in need in Iran. This package amounts to €22 million in humanitarian aid. This is indeed a beginning, and Iranian opposition forces must be invested in by various world powers immediately so that the Islamist regime can be brought to its knees.

As China cracks down on its Tech Sector, Investors bank big on India