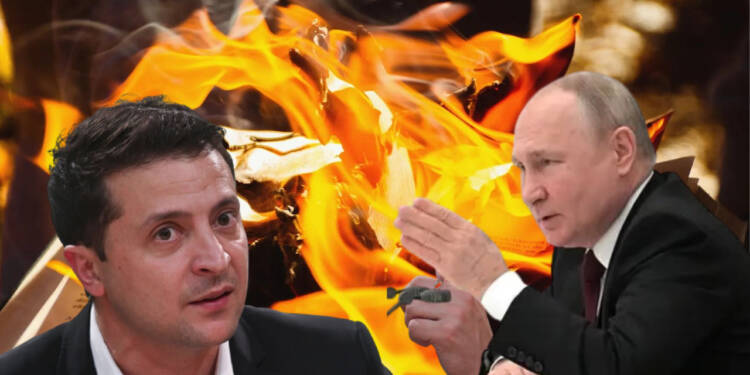 Cracking down on free speech in times of war is hardly new for governments. And Zelensky’s administration is also in line with the chauvinist Ukrainian governments that have been since the 2014 Maidan coup. Such governments have always clamped down on the democratic rights of Russian speakers, whilst glorifying historical Nazis and permitting fascist gangs free reign across the country for years.

The Director of the Ukrainian Book Institute, Oleksandra Koval stated in her interview with Interfax–Ukraine, that more than 100 million copies of so-called “propaganda” books, including Russian classics, need to be withdrawn from public libraries. According to Koval, the process of preparing the regulation of the withdrawal of such books is already underway.

“Of course, we want to do it faster, but we’d be lucky if we managed to remove at least the ideologically harmful literature published in the Soviet times (in two languages, by the way, Russian and Ukrainian), of which there is so much, as well as the Russian literature with anti-Ukrainian content, by the end of the year,” Koval said.

Russian Books in line for a ban

We are talking, she added, first and foremost about withdrawing the Russian books of anti-Ukrainian content that reinforce imperial narratives and promote violence, pro-Russian and chauvinistic policies, from public libraries. The books- include the works of world-renowned writers and poets Dostoyevsky and Pushkin. According to the Minister of Culture and Information Policy, Oleksandr Tkachenko.

In the second stage, books by contemporary Russian authors published in Russia after 1991 will be confiscated. “They will probably be of different genres, too, including children’s books, romance novels, and detective stories. This is obviously what the time requires. Although I understand that they may be in demand,” Koval said.

Koval expressed a desire to complete the first round of withdrawal of Russian books by the end of this year. She insinuated in the interview with Interfax, that they will target “ideologically harmful literature” published when Ukraine was a part of the Soviet Union, as well as Russian literature with so-called “anti-Ukrainian content”. Whereas, the second round of withdrawal is intended to include all books published in Russia since the collapse of the Soviet Union: “they will probably be of different genres, too, including children’s books, romance novels, and detective stories,” Koval explained.

According to Koval’s estimate, this scrapping of “harmful literature” will lead to the ebbing away of half the volume of total books in Ukrainian public and school libraries. But not all copies ought to be removed, says Koval: some should be kept in university and scientific libraries, where Soviet-era children’s fairy tales and romance novels will be preserved “for specialists to study the roots of evil and totalitarianism”.

The removal of Russian books can be seen as the “decommunization” of Ukraine which has been the agenda of Ukrainian governments since 2014. From banning all communist parties and their symbols to placing all the TV stations under government control, it all has been Ukraine’s dirty politics.

This is not the first time when Russian books have been banned by the Ukrainian government. In 2018, the Russian language edition of ‘Stalingrad’  by British historian Antony Beevor was banned, although the ban was later lifted due to pressures from the British embassy. And guess what was the reason for the ban? A passage describing the murder of 90 Jewish children by the Organisation of Ukrainian Nationalists, of which Nazi collaborator Stepan Bandera was a leading figure.

It’s surely not new for governments cracking down on the freedom to free speech and expression but this attack is just the recent of those many attacks orchestrated against the status of the Russian language in Ukraine that long precede this war. A third of Ukrainians regard Russian as their native tongue.

With such a scenario, Ukraine is certainly not doing any justice to its countrymen.