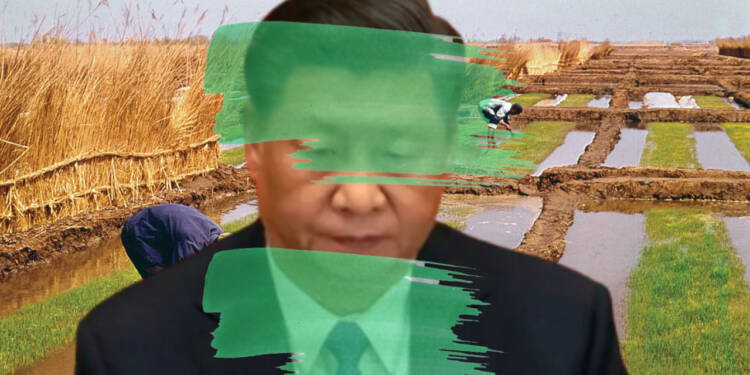 Green is the colour of life, rejuvenation, nature, and energy, and it has connotations of growth, harmony, freshness, security, fertility, and the environment. Green, on the other hand, provides a chance for Chinese citizens to escape the CCP’s oppressive political system.

People are planting sweet potatoes and vegetables on highways and playgrounds because the CCP has mandated that a minimum of 1.8 billion mu (approximately 300 million acres) of arable land be maintained in China. People are also painting concrete ground green to make it look like grass. This is being done in order to deal with the CCP authorities’ inspection and cheat satellite aerial photos.

Arable land is decreasing in China

China has lost one-fifth of its arable land to urbanisation and industrialisation since 1949, with just around 10% to 15% of the area suitable for agriculture remaining. China faces a difficult problem in feeding 22% of the world’s people with only 7% of the world’s arable land.

China may suffer a grain shortfall of about 130 million metric tonnes (MMT) by the end of 2025, according to the South China Morning Post. This imbalance in food grain supply and demand is putting the CCP to shame. Now it is playing the ‘blame game’ with its own officials in order to cover its failure to manage a sufficient supply of grains for Chinese citizens.

Read more: We knew that CCP will go down but didn’t expect this soon

Chinese people are smarter than CCP

When the satellites take images from space, they will be cheated. These fake lands will be regarded as real land. So local people can achieve their "arable land" quota. https://t.co/vDpDZaVhDR

Moreover, in order to boost grain production, CCP is asking its citizens to increase the arable land. And in turn, as people are scared that if they are not able to achieve the ‘arable quota’ as instructed by CCP, they could be punished by the officials. Therefore, citizens have come up with a ‘cheating method’ as mentioned above.

However, if CCP had not spent so much money developing properties to gain money, there would have been no scarcity of arable land, and thus no shortage of food grains. Now that the CCP is experiencing a food deficit, it has ordered that a specific proportion of arable land be preserved by the Chinese citizens. But, as the saying goes, what you see is what you get, and Chinese citizens are deceiving the CCP.