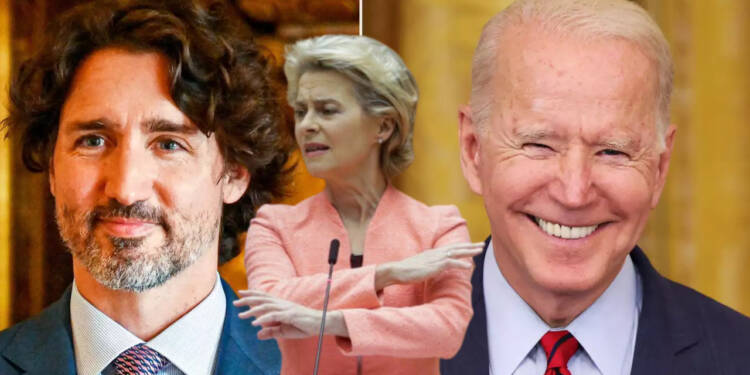 Russian gas dependence is similar to a drug addiction for Europe. No matter how hard Biden tries, it’s nearly impossible for him to wean Europe off Russian energy. In fact, the issue has just started to create rifts in the long-cherished rock-solid diplomatic ties between Europe and US.

Due to rising gas prices and throttled energy supplies, Biden’s war in Ukraine is fast getting unpopular in Europe. Europe is prioritizing its trade relations with Russia ahead of Biden’s war-mongering. The 79-year-old senile President is now realizing that the energy trade between Russia and Europe is his biggest Achilles’ heel.

So, finding Biden in the hot soup, Trudeau has now come to Biden’s rescue. It turns out that Canada is forcing Russia to stop its gas supplies to Europe by withholding the delivery of important equipment to the Russian government. Actually, Canada has impounded Russia-owned gas turbines, that were supposed to be used by Russia to pump gas into European pipelines.

Canada moves to ignite tensions between Europe and Russia

Germany’s Siemens Energy company had previously received these turbines for repairing and servicing. Now, the Trudeau government isn’t ready to let them go off. When pressed by the media over the issue, Trudeau simply swept the questions under the carpet by saying that “they are in active discussions with the German government.”

Canada cites its own sanctions imposed on Russia behind the seizure of the turbines in question. The Trudeau administration says that “the type of gas turbine under repair in Montreal is on Ottawa’s Restricted Goods and Technologies List of products that cannot be exported, in order to deny Russia access to goods and technology that could benefit their military.”

Trudeau, in order to please his master Joe Biden, is thus engineering a catastrophe in Europe. As a result of Canada’s actions, the gas flow from Russia through the Nord Stream 1 gas pipeline has reduced by 60%. On Wednesday, Russia’s Gazprom said that flows were at 67 million cubic meters per day instead of 167 million cubic meters. Russia’s deputy Prime Minister Alexander Novak said that Moscow was willing to provide Europe with required gas but, he says, “it’s necessary to create economic conditions and not close supplies politically.”

Of all, Italy, Germany, Austria, and France are the worst affected. Bloomberg reported that European nations are forced to scoop out gas from their winter reserves in order to stay afloat. Storage levels fell this week for the first time since mid-April, when traders typically start to top-up facilities.

Biden’s war gets a new life

Simply put, this is the storing-in period for Europe, where countries generally look forward to storing gas for the upcoming winters. This year, however, the trend is the exact opposite. They are forced to exploit gas reserves during the storing-in period, which means that they won’t have enough gas left in their reservoirs when winters would strike. Experts believe this is Canada’s doing.

By orchestrating even a bigger gas crisis in Europe, Canada simply wants to create tensions between Russia and Europe. The idea is that a panic-stricken Europe would be of greater help in mounting pressure on Russia and be forced to adopt a more confrontational stance against the Kremlin. Thus, the seizure of important equipment by Canada has given Biden’s war-mongering efforts a new lease of life.

Baltic nations came up with a loyalty test for Joe Biden, he fails miserably