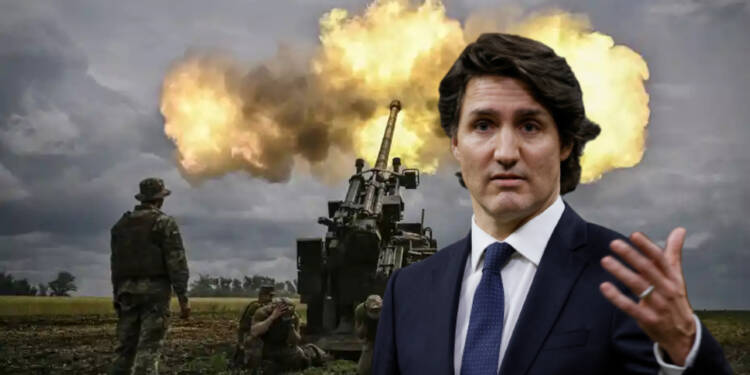 Back in March, when the war in eastern Europe was gaining momentum with missiles gliding past the demarcation lines of Ukraine, somewhere in Ottawa, the officials were inking a deal to supply Ukraine with military assistance in order to help defend the eastern European country its sovereignty.

The motive to support Ukraine in these trying times got all the praise it needed but a rather interesting fact was it is Canada that is upfront in the run to assist Ukraine militarily. It is a brass fact that Canada’s military is in shambles or more precisely Canada is military less. Fearing the sudden Russian incursion of Ukraine, many within Canada held optimism that prime minister Justin Trudeau will increase their defence spending. But the incumbent prime minister had his kitty full of other humanitarian deeds to focus on.

According to NATO’s defence standards, every NATO-aligned member must spend at least 2% of its GDP on the military budget. However, if the Canadian government authorities are to be believed, Canada’s spending on this issue is barely around 1.5%.

Justin Trudeau is a Man Friday of American president Joe Biden, and there may be less opposition from our viewers on that claim.

After the Ukraine war, Trudeau has completely made an incarnation into a Canadian Biden with shenanigans going as far as allegedly funding and assisting the Ukrainian militias to train the Neo-Nazi Azov brigade. This happens at a time when the Canadian air force runs out of fighter aircraft owning to Trudeau’s delay tactics that have created a huge capability gap in Canada’s fighter aircraft fleet.

Read more: Canada is allegedly spending more on Ukrainian militias than its own military

The implications of getting carried away by the big talks of Joe Biden also ensured Canada feels the pain of a record high inflation that has seen an astronomical jump in rates compared to the past years.

For consumers, this is a double whammy. The economic upheaval is due to the Ukraine war having impacted inflation. Canada’s inflation rate has seen a 31-year high of 6.8%, which is a lot for stagnant economies. Bank of Canada deputy governor Toni Gravelle said in his remarks. Regular purchases like gasoline and groceries will continue to shoot up due to the higher prices for commodities such as oil, wheat, and fertilizer.

According to the opinions voiced by experts, the country is passing through a climate of downfall that may push more Canadians to the risk of hunger for soliciting a needless involvement in the Ukraine war triggering Russia.

Moreover, Russia’s monopoly over natural gas happens to be another hammering on Trudeau’s political ineptness. Russia supplies around 19 per cent of the world’s natural gas and 11 per cent of oil. Energy prices have jumped alarmingly and this holds true for all G7 nations including Canada.

Russia played its latest strategy of blocking Ukraine’s food exports by using the black sea, which left the world gape in awe. A sizeable number of countries rely upon Ukraine and Russia for wheat and grains, and so is Canada.

She said Canadians were already struggling to afford groceries, with more and more people, including those with jobs, turning to food banks.

With protests emerging from all quarters of Canada, Trudeau could no longer hide behind the safe haven of his office in Ottawa, so the Prime Minister was forced to give his share of opinion on this matter.

With all this mayhem circling Canada, Trudeau found time to offer a speck of humour towards the war arena by giving ‘SNIPER WALI’ the enigmatic war veteran touted as the deadliest sniper in the world to Ukraine. But, fate scripted a different story as Wali returned back home to Canada where he described trembling to the media about how he saw death in front of him.

Instead of preaching high morale and simply focussing on its internal matters Justin Trudeau could have turned his critics down, but as the saying goes when you repeat a mistake, it is not a mistake anymore: It is a decision.