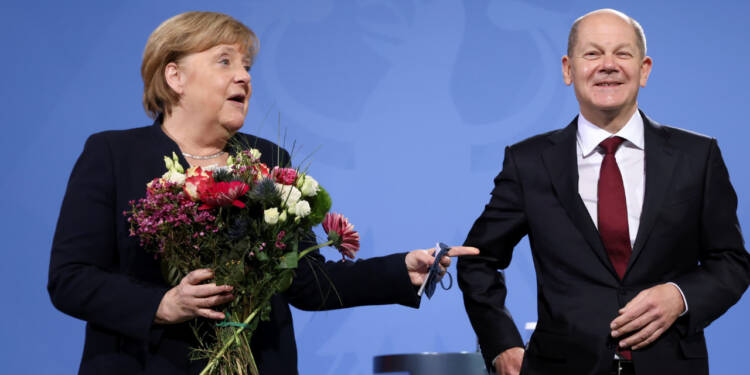 Even though Olaf Scholz and former chancellor Angela Merkel fall in the same line of politics, the political acumen possessed by the latter is unrivalled that mostly helped Germany leap to become a superpower in the European bloc.

Angela Merkel puts a lot of thought behind every word she utters. Diplomacy was a formidable weapon in Merkel’s playbook. It may be a fact that much of her policies had an insidious tinge, but it never takes away the legend of Merkel and the reverence she garnered from the global stage.

Following her footsteps came Olaf Scholz, the former mayor of Hamburg who adorned a technocratic image and ascended to the challenge of filling the boots of Angela Merkel.

Every hope of pragmatism went awry for the former mayor as the crisis happened in sequence since his ascension. Covid gave colossal damage to the German economy and the left-alliance in Germany never seemed to be in good ties with sometimes talks even going to the verge of the government falling.

Angela Merkel did a yeoman’s work to position Germany as a superior force in the world and mostly in Europe. The Ukraine war of late February was a boon to Olaf Scholz to do a consultation with his former boss to mend straight the deteriorating situation that the country faced. Russia had a very impactful relationship with Berlin and the Nordstream-2 pipeline was a testament to the same.

In the meanwhile, the West led by the United States was building a compelling design to annihilate Russia. Being a superpower in Europe, it was expected of Germany to make a decision that weighed significance. But Olaf Scholz made a walk into the US line of politics that triggered the leadership in Kremlin.

Carried away by the utopian dream of Ukraine winning the war, Scholz went to the extent of ending the much-celebrated Nordstream2 pipeline. Everyone thought that Olaf Scholz will mirror the opinion of Angela Merkel when it comes to Russia, but the 63-year-old leader digressed further into the US camp rather than adopting the pragmatic approach of his former boss.

Merkel is a fluent Russian speaker and always defended her policy of supporting trade with Russia, saying Europe and Russia were neighbours and could not ignore each other. Her policy was about building ties with “the second most powerful nuclear-armed [nation] in the world,”

The story has now gone too far and Russia is cruising ahead in the war while the West and EU-led allies seem to be nowhere in the picture supporting a battered Ukraine. Moreover, it is payback time for Russia now and Putin always remembers the past.

Russian state-run Gazprom has raised fears that Moscow is starting a wider squeeze on European gas supplies in response to EU sanctions against its economy following the invasion of Ukraine. Gazprom said it was reducing capacity on the Nord Stream 1 pipeline to 60 per cent, the day after announcing an initial 40 per cent reduction.

Gazprom’s sudden move to end gas supplies is a crisis for Germany and Berlin may be forced to use the reserves stored particularly for the winter season. This will be a catastrophe for the once European superpower. Inclement weather coming ahead may see the German populace going into penury with no better means to heat up for survival.

Olaf Scholz now has got the grip on reality. He is open to talks with Russia now but the Kremlin seems in no mood to receive the confused leader. Whatever it be, Angela Merkel’s argumentation of the crucial flaws that Germany committed in the Ukraine war stands vindicated. Olaf Scholz is now trying to adopt Merkel’s serene style to appease Putin and if he needs to grovel in front of Putin for alms, this time he may indeed do it without any confusion.

Musk, not Mao: The newfound love among Chinese millennials