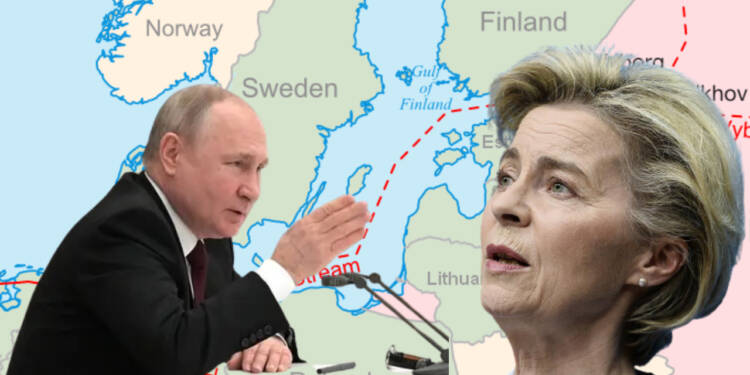 Another lesson from Russia for the west is on the way. Russia is trying to choke Europe by restricting gas supplies. Earlier Germany closed down Nord stream-2, so in a sought of revenge, Russia plans to turn off Nord stream-1 citing some technical issues.

Nevertheless, Germany remains highly dependent on Russian gas. Russian gas has been used to heat homes, power companies, cook food, and light streets throughout Germany for the past 50 years. It has been one of the top importers of Russian gas among European countries.

Germany has no other option but to import gas

However, since the invasion of Ukraine, the West, particularly Germany, has been dragging its feet on a proposed European energy embargo against Russia. Since the conflict, the share of Russian lands has decreased from 55 percent to 35 percent. In the midst of the Russia-Ukraine conflict, Germany went so far as to suspend the Nord Stream-2 pipelines. Now, alleging technical engine faults and delays in repair work by Siemens, a Munich-based automation company, Russian energy giant Gazprom has restricted gas supply to Germany via the Nord Stream 1 Baltic Sea pipeline.

And Germany will suffer greatly as a result of this circumstance. In fact, Germany receives all of its gas via pipelines and does not yet have any operational liquefied natural gas import facilities (LNG). Germany, on the other hand, has been attempting to wean itself off Russian gas by seeking to construct two liquefied natural gas (LNG) terminals in the next two years. But, like anything else, it has its limitations.

For example, due to a lack of political will and the prevalence of red tape in the bureaucratic process of developing these terminals, completing the project in two years is nearly impossible. Regardless, even if Germany successfully completes the project, it will be unable to compete with Russia’s lower gas costs.

And now that Russia has stopped supplying gas via Nord Stream-1, these gas decreases are clearly causing Germany problems.

This has exacerbated the situation, as these European countries are already having difficulty sourcing Russian gas replacements.

According to the report, the company, which is under the external control of Germany’s Federal Network Agency, is now obligated to buy gas on the market under new contracts that are significantly more expensive than the previous ones. This would eventually result in increased prices, which would be borne by gas customers.

As a result, these western nations, particularly Germany, would be wise to make a decision that is in their respective national interests. Rather than making a hurried decision, they should consider if imposing a Russian gas embargo is a viable answer. By the way, it clearly isn’t!