Germany jumped off a cliff, and now it’s saying that Canada pushed it 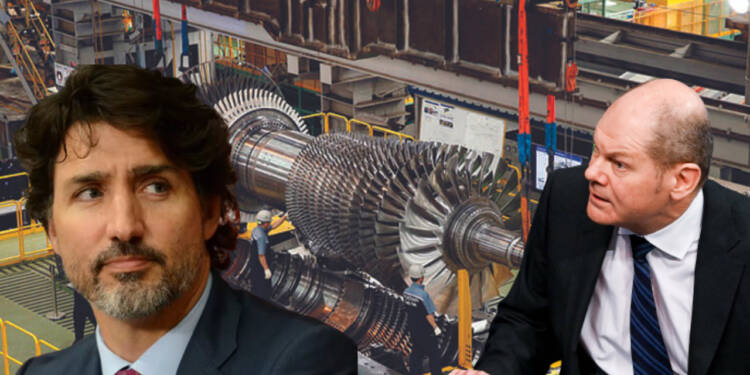 Trudeau’s anti-Russia actions have drawn rare, yet quite blunt criticism from Europe. Germany is not happy with Ottawa’s anti-Moscow moves, and resultantly, Olaf Scholz is in no mood to go easy on Justin Trudeau in the next G7 meeting slated to be held later this month.

When Justin Trudeau decided to withhold delivery of gas turbines to Russia earlier this month, what he expected was a pat on the back from Canada’s European allies. However, the response from Europe was the exact opposite—Canada’s anti-Russia move ended up infuriating key European powers in epic proportions. And now, Canada stands the risk of jeopardizing its healthy diplomatic relations with the European Union.

This all started with Canada impounding Russia-owned gas turbines this month. The move was aimed at paralyzing Russia’s gas supplies to Europe since the gas turbines were supposed to be used by Russia to pump gas into European pipelines. Germany’s Siemens Energy company had previously received these turbines for repairing and servicing. Subsequently, the Trudeau government invoked sanctions on Russia to block the delivery of these turbines back to Moscow.

Now, this move by Canada to inflict damage on the Russian economy has exacerbated the gas crisis in the European Union. Citing technical issues, Russia has already cut down gas flows via the Nord Stream 1 pipeline to Germany by 60%. On Wednesday, Russia’s Gazprom said that flows were at 67 million cubic meters per day instead of 167 million cubic meters.

Russia’s deputy Prime Minister Alexander Novak said that Moscow was willing to provide Europe with required gas but, he says, “it’s necessary to create economic conditions and not close supplies politically.” In fact, the head of the International Energy Agency has also warned that Russia could completely turn off gas supplies to Europe before this winter citing ‘technical faults’.

So, a panic-stricken Europe is now directing all of its anger at Canada for pushing the bloc into a deeper gas crisis. TFI Global has learnt that the German government is fuming at the Trudeau government for withholding the delivery of the gas turbines. The Olaf Scholz administration is also expected to pile pressure on Trudeau in the upcoming G7 summit later this month. The message from Berlin is stern and striking—No one will be allowed to hurt the interests of the German economy in process of piling economic pressure on Russia.

Diplomatic tussle breaks out between EU and Canada

Canada’s Global News reported that even the Canadian government has acknowledged concerns expressed by its EU allies. Jonathan Wilkinson, Canada’s Natural Resources Minister, on Wednesday said that “If you talk to the Germans, they are very, very concerned about” a decline in gas supplies allegedly caused by the missing turbine”. The minister added, “I’m sure it’ll come up at least in the corridors of the G7 … I wouldn’t hold my breath that we’re going to find a resolution before the end.”

European governments are worried that if gas supplies from Russia are not restored to previous levels, the Europeans would fall prey to ruthless bone-chilling weather by the end of the year. For the unaware, this is the storing-in period for Europe, where countries generally look forward to storing gas for the upcoming winters. This year, however, the trend is the exact opposite. They are forced to exploit gas reserves during the storing-in period, which means that they won’t have enough gas left in their reservoirs when winters would strike.

All in all, the reckless actions by the Trudeau government against Russia have now rocked the boat for the cordial trans-atlantic relations between Canada and the EU. Canada’s actions against Moscow have thus spectacularly backfired, and we could see Canada sooner than later walking back its anti-Russia position. Moreover, this episode has also smacked some sense into Europe that doing away with Russian energy would only prove suicidal for the bloc.

Collection of 26 Arrogance quotes and captions