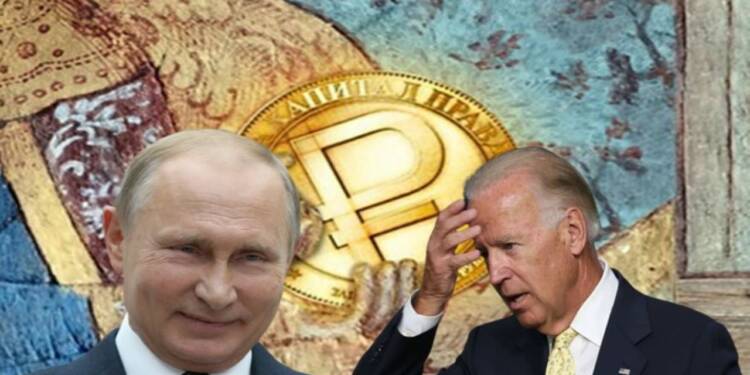 After Russia’s invasion of Ukraine this February, the West has tried every trick in the book to wound the Russian economy. Alas! None has yielded desired results. In fact, Russia has rebounded impressively, much to the West’s chagrin.

When the war broke out, the first move that Europe played was to kick Russia off the SWIFT payment system. The EU dreamt that this will paralyze Russia’s trade with the world. Initially, the Russian ruble took a massive hit; however, Putin’s decision to peg the currency with gold upended the situation in Russia’s favour.

Russia asked to use ‘stablecoins’

Now, researchers at Russian bank VEB have suggested that the country issue a gold-backed stablecoin for international payments. Simply put, the country will soon use gold-backed cryptocurrency, in a first. Russia’s Institute of Research and Expertise floated the idea in a report that Gold can very well serve as backing for a “golden ruble” stablecoin, or the electronic version of the Russian currency.

The report says, “Americans won’t have any means to block operations with the crypto-golden ruble because the price will be tied to the price of gold on the global market.” It added, “The stablecoin would be used exclusively for settling import and export transactions, not for payment inside Russia.”

The ‘stable’ factor in Russian currency

The authors of the report have recommended the creation of a blockchain-based settlement system. Alternatively, each country could issue its own digital currency circulating on national markets that would be connected by “corridors” for settlement.

Taking a leaf out of Iran’s playbook

Here, Russia is apparently taking a leaf out of Iran’s playbook in using cryptocurrencies to evade sanctions. Crypto mining is heavily popular in Iran, given the maddening magnitude of Western sanctions. The authors said Iran’s case shows that cryptocurrencies can be a real alternative to the U.S. dollar in certain circumstances.

That’s why, for the hawkish policymakers in the West, finding a counter to Putin’s ‘stablecoin’ move will really be an arduous task. So, the stablecoin move will really come across as a game-changer in the long run, which will revitalize Russia’s participation in the international trade system.