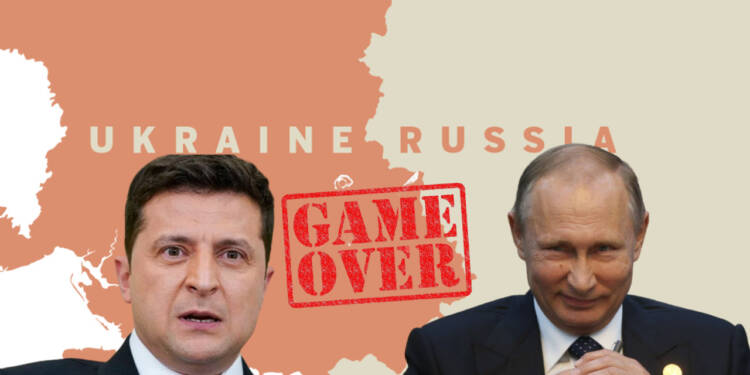 Ukraine is living in cloud cuckoo land. It’s facing huge losses in terms of life, arms, and territory every day in its war against Russia. In more than a hundred days of the war, it is on verge of turning into a land-locked country. As recent reports come, Kyiv’s another 2000 soldiers including 80 foreign fighters have been surrounded near Hirske and Zolote, south of Lysychansk.

But Zelensky and his administration sit aloof from their army concerns. At this point in time, he should be reminded of writer H.G. Wells historical lines, “If we don’t end war, war will end us.”

In mid-May, Italy proposed a four-point peace plan in its effort to put an end to the Ukraine war. Firstly, it called for cease-fire and demilitarization. It asked Ukraine and Russia to decide on the future of contentious territories. Moreover, it asked for the withdrawal of Russian troops from Ukraine and removal of western sanctions on Moscow. It also asked Kyiv to declare itself as a ‘neutral’ country. The proposal was also supported by US as its ambassador to UN Linda Thomas-Greenfield said, “We encourage all efforts to achieve a peaceful solution for the Ukrainian people that is acceptable to them. And the Italian initiative is one of those initiatives that we certainly would love to see bring a conclusion to this horrific war and the horrific attacks on the Ukrainian people.”

However, Ukraine continued to ignore the peace proposed by Italy. Even American former diplomat Henry Kissinger tried to put some sense in Zelensky and his ilk. “Parties should be brought to peace talks within the next two months,” he said at World Economic Forum in Davos, Switzerland. Rather it irked dim-witted Zelensky and in a video address he attacked the senior diplomat, “You get the impression that Mr. Kissinger doesn’t have 2022 on his calendar, but 1938, and that he thinks he is talking to an audience not in Davos but in Munich back then.”

Then, there was a report by CNN that detailed how Western allies like US officials were meeting with their British and European counterparts to discuss possible plans for a cease-fire and a diplomatic solution to end the Ukraine War. Even when Macron asked not to ‘humiliate’ Russia as that wouldn’t help in post-war diplomatic efforts, it saw a hostile reaction from the Ukrainian side.

And just recently in an interview with a Spanish newspaper NATO chief has implied again, “Most likely, Ukraine war will end at the negotiating table.”

These are just a few instances when so many leaders have tried to persuade Ukraine of considering negotiations.

Ukraine has ignored all these suggestions and ridiculed people suggesting the same. Ukraine plans to prolong the war till the end of the year. Ukraine’s head of intelligence Kirill Budanov has even asserted to take Crimea. It doesn’t seem like a feasible approach against the world’s second-largest army unless NATO helps it. But NATO has already asked Ukraine to surrender.

Negotiations between Moscow and Kyiv haven’t taken place since March. Since then, Kyiv has insisted that discussions won’t begin until it is in a “stronger bargaining position,” and Ukrainian President Volodymyr Zelensky has said that talks won’t resume until Kyiv reclaims territory it lost after February 24.

Ukraine’s chief negotiator has also hinted that Ukraine will go for negotiations after its counter-offensive in August when they’ll try to regain the lost territories.

It’s surprising how disillusioned Zelensky and his regime have been so far. Though at times we have heard sanity coming from the comedian turned politician too. In an interview with Ukrainian journalists on National TV in May, he had said, “All of us, including myself, will perceive even the possibility of negotiations as a challenge. First of all, one’s own, human challenge. Then, when you pull yourself together, and you have to do it, I think that we have no other choice.”

Well, somewhere Zelensky has known all this while how the war will come to end. But he has been too arrogant and inconsiderate to accept the losses they have suffered.

Late Columbian novelist Gabriel García Márquez word holds true for Ukraine and Zelensky, “It is easier to start a war than to end it.”

Russia which has been tired of this spectacle has now put its own conditions for negotiations. He even attacked Britain and America who have been giving weapons to Ukraine and lengthening the war.

In an interview with Belarusian state TV, Russia’s Foreign Minister said, “When [Ukraine] deigns to turn to us with a proposal to resume the diplomatic process, which, as I understand it, the Europeans are urgently asking them to do, but the Anglo-Saxons do not allow this, we will look at the situation on the ground.”

The statement is significant as it reiterates Russia’s objectives in Ukraine and it wouldn’t like to give up its advantageous positions on the ground. It would even want to reclaim more of Ukraine’s territory.

Only a week back, deputy chair of Russia’s National Security Council Dmitry Medvedev said that Ukraine wouldn’t survive to pay back its debts.

“Who said that in two years Ukraine would still be on the world map?”

These recent statements by two senior Russian officials insinuate that it might be too late for Ukraine to ask for negotiations. It pushed Russia to the wall when it provoked it by wanting to join NATO. Now, it’ll be up to Putin, what they make of negotiations and Ukraine.

Middle East is coming up with its own version of NATO