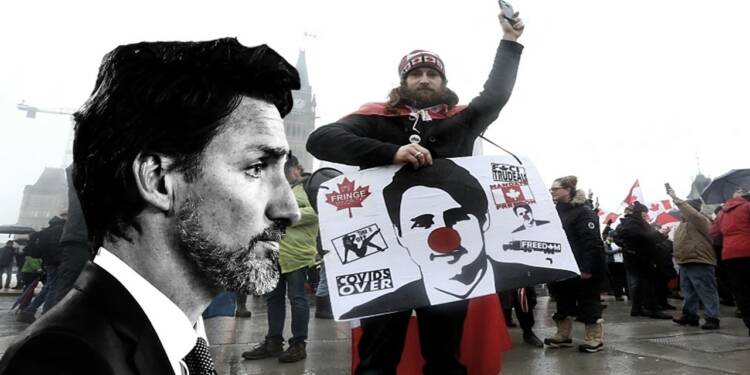 Canada day falls on July 1st. Pancake breakfasts, patriotic parades, and celebratory festivals capture the true essence of what that day is all about for Canadians. Many people paint their faces red and white, which are Canada’s national colours. But this year someone else is also busy painting, not his face, but the overall federal structure of Canada.

No politician can match Justin Trudeau’s acumen when it comes to preaching high morality and liberty. The 23rth prime minister of Canada who hails from Quebec has made it a staple to go on with big talks of liberalism, just to get some bravos from millennials who straddle between marijuana and Karl Marx.

But when it comes to practicing the same, Trudeau doesn’t walk the talk. That’s what the current situation in Canada suggests.

The federal government of Canada is ramping up efforts to stop the celebrations in Ottawa after talks spread about a protest planned for the upcoming holiday weekend in Ottawa.

“I do think it is troubling that some are fanning flames … we don’t want a replay of last winter and we don’t want people engaging in illegal behaviour or violence that is disruptive to the community here in Ottawa or anywhere else.” Marco Mendicino, the federal public safety minister said.

Camping and the placement of structures in City Parks are not permitted, unless the authority to do so has been granted through a permit.

Enforcement will be on a zero tolerance basis. #OttCity pic.twitter.com/LImsedgvgz

Talks radiated about demonstrations planned throughout the summer against the Trudeau government invoking back the emergencies act that can declare a national emergency in response to an urgent and critical situation.

The capital city’s police force continues to face criticism about how it handled the anti-COVID-19 restriction protests last winter that gridlocked Ottawa for three weeks after protesters — some calling for the overthrow of the federal government.

Back in the time, Trudeau remarked on the farmers’ protest in India as apathy and even endorsed the insurgents that gave New Delhi a climate of chaos. But time gave a perfect repartee to Trudeau as the truckers’ protest of winter gave sufficient contribution to dent the safely harboured image of Justin Trudeau as the messiah of liberalism on the global stage. The world saw Trudeau incarnate into an authoritarian stifling down the protesters while at the same time giving masterclass on morality.

Now Trudeau is back in the same incarnate with Security efforts beefed up in Canada in fear of protest especially in front of the Supreme Court of Canada and Parliament Hill ahead of freedom events planned for Canada Day. The music concerts and other celebratory events are restricted in many areas as the federal government is confusing everything for protest.

“No person shall occupy, reside, camp or sleep in or upon any public work or use any vehicle for the purpose of occupying a public work or residing, camping or sleeping thereon.” reads a sign on the lawn of the Supreme Court.

Vehicles that are “taking part in any form of demonstration, event, protest or rally” will be prohibited in the city’s “motor vehicle control zone”. Ottawa mayor Jim Watson warned.

Minister Marco Medicino further reasoned out that they learned lessons from the past winter and also assured giving all support to police in their move to achieve peace.

Trudeau’s government is all set to trample down on people by removing all niceties by putting up fences, high castles, and barricades to desist any kind of celebration in Ottawa. And the crown jewel of all is limiting the waving of Canadian flags by freedom organizers. Hail the liberal champion!

When Trudeau emerged at the helm of affairs in Canada, the world discerned that anybody could scream whatever they cared about. Because it is Canada and more like it is Justin Trudeau’s Canada.

But now, if you want to scream out whatever the larynx allows you to, better identify yourself as an immigrant, that may well work with Trudeau.